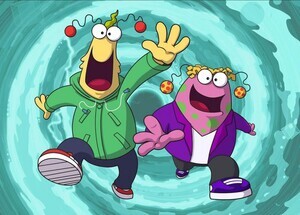 Zig and Zag’s new show kicked off on Tuesday on tykes’ channel RTÉ Jr. CBBC are also  broadcasting the new series, voiced and written by Mick O’Hara and Ciaran Morrison.

Now residing in the town of Burbia, new Zig and Zag shenanigans include ice-cream cloning, becoming art darlings and general messing like it’s 1990.

No Zuppy as of yet, though.

2 thoughts on “What A Long, Strange Trip It’s Been”