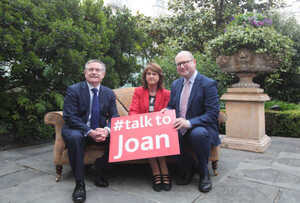 His predictions were almost spot on.

Time then for some schadenfreudin’.

I wouldn’t be the gambling type. At least not with money. It could be argued that on more than a few occasions I have let my fate up to the Gods.

I have, however, welched on one bet. Made in the dying embers of what is now the government before last, it was the Labour Party’s Brendan Howlin.

We were in the Members Bar of Leinster House. I was expressing the hope that The Greens might return two TDs in the form of Trevor Sargent and Eamon Ryan. Not a hope says the bould Brendan dancing with glee already then on our yet to be dead corpse.

There was something in the sheer nastiness of his approach that goaded me into accepting a challenge I shouldn’t have. I subsequently never honoured the bet, fearing the sadistic glee in which it would have been received.

The Germans have a word for it. I can’t lie and say I haven’t felt a least some of that enjoyment from the Labour Party’s current predicament. It is though an enjoyment mixed with a small degree of sympathy.

The decent members of a proud party were sold myths about ‘saving the country’ by those who wanted to hold office just one more time. I have choked on the irony of listening to many Labour spokespersons talk about, despite knowing their party was being damaged, that the national interest came first.

When Greens were making the same arguments in 2011 it was Labour representatives who were doing the most baying.

There has also been an element of Stockholm syndrome in merging with, then becoming unidentifiable with, their coalition partners.

The Fine Gael failure has been just as marked. There are many reasons why Fine Gael has never come out of government successfully, none of which the party will ever admit to itself.

A story John Gormley once told me, which I’ve written about before, bears retelling. Before he was in elected politics FG canvassers called to his house.

Asking them what they thought the difference between FG and FF were they advanced what they believed was the killer argument.

“I think you’ll find in Fine Gael there is a better class of person”.

The sad thing is that many of their members do believe this. This sense of priggishness, that only they have the moral fibre and character to act on behalf of the nation, is the characteristic trait most seen and least liked by the general public.

There is little likelihood the party will suddenly develop any sense of modesty yet.

It’s reward may be to remain in office but with power removed, this now placed more firmly into the hands of its errant sibling, Fianna Fáil.

75 thoughts on “The Germans Have A Word For It”