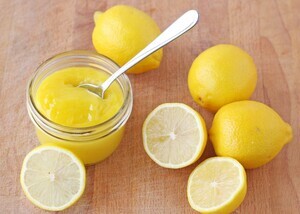 A column in two parts.

One half lemon-based recipe.

One half political analysis

Get 6 yolks (not your usual ones, the ones in the cartons). 350gms of Castor Sugar, and the juice of 4 lemons (bath them in a bowl of warm to hot water first and you’ll squaze more outta’ve’em.)

Tip the lot into a bowl that sits over a pot of simmering water and bate ‘till the sugar grains are dissolved.

Chunk up 225gms of Butter, the real stuff, and plop one by one into the bowl above. Keep batin’ until the substance coats the back of a spoon, and when you lick it, the licked stripe stays in place. (eg if the bits your tongue missed don’t keep running.)

Do not turn your back on that pot and don’t let it get too hot. Your Lemon Curd‘ll split so keep it simmering and you keep whisking. When you think its right, let it cool, it should fill a good sized jam jar.

Now, get those egg whites. 6, if the dog didn’t get at them. And bate them with the ba’jaysus of a mixer in top gear. Anudder 350 gms of sugar by one spoon at a time into the whizzing. (You could just use 4 & 250gm like I do) Keep going ‘till its gorgeously white and thick and glossy n’sticky. It might even be warm. If this doesn’t happen you let some yolk into it, or the mixing bowl wasn’t clean.

Get yerself some whipped cream. Stiff stuff and paste the top of what came out of the oven. Ladle the curd to your own taste; I add a handful of rasas and then roll. Dust over with icing sugar if ye like, I don’t bother.

A daycent’ slap, a pint a’ Rosé, and that’s me. I’d nearly get Saturday and Sunday night out’ve it. As long as there’s a few boxes of Ice Burgers in the fridge for everyone else like.

So just in case yere wondering…

I’ve deliberately started my Easter Holidays with a recipe as the only other words I have and the only ones that are making it out of my trap for ye are GE16 Round 1 related.

I want to forget about this shagging election, the bogus efforts of Government hogging up all the news cycles, and the shyte talk of who will be Taoiseach from the gimps that’ve just been dumped.

This place too, has been bulging with results threads. I’ve a pain in me whole.

Anything I have to say regarding the conduct of RTÉ in the week before and the days after the polls closed would slaughter a sow, so I’ll stay off topic, only to say:

(1) that Ivan Yates (TV3) was brilliant on Saturday & Sunday, he was only outshone by Matt Carthy who played a blinder, from Montrose to Carrickmacross to Ballymount and back. Nothing Miriam tried fazed him or that twinkle he had all weekend. (Can’t believe he’s 38 btw.) Miriam is a talk show host, not a journalist.

(ii) I have no intentions of respecting the mandate the electorate returned last week (apologies Anne-Marie), because the electorate were deliberately denied information that had the capacity to influence their vote (eg Noonan) furthermore, they were deliberately overwhelmed with misleading propaganda by mainstream media. That’s vote rigging as far as I’m concerned. Someone here last week wrote about Fear & Loathing on the Campaign. I’m not going to do it here again.

When Round 2 gets underway, a Top Table FFer reckons Late May/ Early June btw, the Shinners better have their vote management sorted and don’t let their votes get scared into voting for Labour & FF like last week (eg Dublin West.)

I also think there are a few Independents and Soci-Dees they should have a voting pact with SF at Constituency level. Reada Cronin might see the benefit of having a discreet chat with Mrs Murphy, a bitta Workers Party common ground might come in handy.

Snoddy needs a good talking to, his guzzling-up of party votes for himself have left us here in DSC [Dublin South Central] with NO MINISTERIAL CANDIDATE, again.

There has been no one of substance in this massively mixed, from KCR to Ballier, with massive industrial output, with 3 massive Hospital facilities and several established 3rd level Institutions, and whatever you’re having yerself, since Mary Upton, Joan Collins & Bríd Smith ffs…..And that Cat’rin Byrne can barely fill a post-it note.

Ah here. I’m off on me holidays. See ye in April.

60 thoughts on “When Life Gives You Lemons”