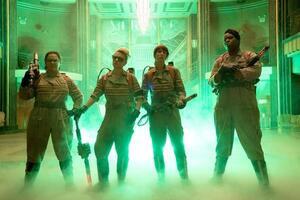 1. It’s the first proper look at Paul Feig’s ill-advised reboot. And it hasn’t gone down well.

2. “I’m not a misogynist, but I play one on TV”. The decision to go with an all-female cast has been heavily criticised since the project was first announced.

3. Now Leslie Jones is getting heat over the fact that her character is the only one of the principal cast that’s not a scientist.

4. Calm down. No one’s childhood is getting raped.

5. Yes, this looks terrible. No, it’s not funny. But it’s probably no worse than the Ghostbusters 3 project that Dan Aykroyd was developing for over a decade. And it won’t change how good the original Ghostbusters is.