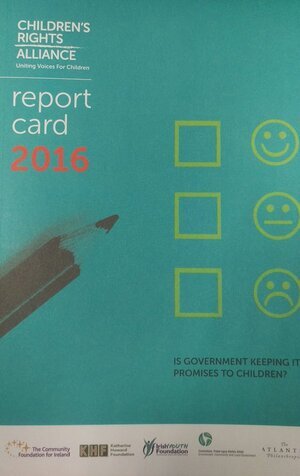 It’s an assessment of how the Government has treated children and young people in Ireland.

On school patronage and divestment:

‘Patronage and Pluralism in Primary Education’ is awarded a ‘D’ in Report Card 2016, a drop from the ‘C+’ it received last year. While acknowledging that a small number of new multi-denominational schools were opened in 2015 and a consultation on the Education in Religions and Beliefs (ERB) and Ethics was commenced, the divestment process has stalled with no clear vision or mechanism as to how it is to be progressed.

The Equal Status Acts 2000-2012, which prohibit discrimination including on religious grounds, provide an exemption that allows schools of a particular religious ethos to give preference to students of that religious denomination, or refuse admission to students of other or no religion in order to preserve the school’s ethos.

The fact that the law permits religious discrimination in school admissions has been heavily criticised by the UN Committee on the Rights of the Child,189 the UN Committee on Economic, Social and Cultural Rights, the Irish Human Rights and Equality Commission191 and the Ombudsman for Children. The publication of the Education (Admission to Schools) Bill 2015 in April 2015 was a missed opportunity to remedy this issue.

‘Child and Youth Homelessness’ receives an ‘F’ grade in Report Card 2016, a fall from last year’s ‘D+’ grade. Homelessness among families with children has reached crisis point with numbers increasing month on month.

The number of families experiencing homelessness has increased dramatically. In October 2015, there were 774 families, with 1,638 children, living in emergency accommodation. The number of children becoming homeless rose by 90 per cent during 2015 and children now account for almost one-third of the homeless population. The majority of these homeless families were in Dublin.

The rise in homelessness is set against the backdrop of a very large number of households on the social housing waiting list – 89,872 households in 2013, with 47 per cent waiting seven years or more.

In October 2015, the Government approved an immediate initiation of a programme for the early delivery of 500 units of modular housing. The first 22 homes were expected to be completed in Ballymun by 21 December 2015 with a further 128 units to be delivered by February 2016 on various sites in the Dublin City Council. None of the modular housing units have yet been delivered.

On Traveller and Roma children:

‘Traveller and Roma Children’ is awarded an ‘E-’ grade in Report Card 2016, a decrease from last year’s ‘E+’ grade. The lower grade reflects the Government’s persistent failure to implement their commitment to recognise the ethnic minority status of Travellers and the missed opportunity presented by the Carrickmines fire tragedy to uphold the rights of Traveller children. Traveller and Roma children continued to face educational disadvantage in 2015.

The coordination of delivery of services for Travellers remains very weak. In many cases whilst policies and strategies have been put in place, there is limited implementation, monitoring, evaluation or accountability. For example, the National Traveller Health Advisory Committee (NTHAC) entrusted with developing a strategy to respond to the All-Ireland Traveller Health Study in 2010 has not met since 2012.

Between 2008 and 2013, funding for interagency activities relating to Travellers was cut completely and has not been reinstated.

There are 14,913 Traveller children living in Ireland. The Traveller community has a very young population with 42 per cent of Travellers under the age of 15 years. At the end of the Programme for Government, outcomes for Traveller and Roma children continue to be among the worst for children in Ireland in areas such as equality and non-discrimination, access to social protection, health, education, and accommodation.

The Final Report of the Child Care Law Reporting Project, published in November 2015, noted that Traveller children are over-represented in child protection cases coming before the courts compared to the general population.

On 9 October 2015, a fire at a temporary Traveller halting site, in Carrickmines, Dublin, killed ten people including five children. Local residents objected to the use of a nearby green field site to re-accommodate the survivors on a temporary basis.

Legal action by residents threatened to delay the relocation decision so the Local Authority accommodated the survivors in an alternative site – a car park. The Carrickmines fire tragedy highlighted the deeply rooted racism in Irish society towards Travellers and focused national attention on the deficits of Traveller accommodation.

‘Migrant Children’ receives a ‘D-’ in Report Card 2016. This grade represents an increase on last year’s ‘E+’ grade. The increased grade reflects the fact that the Working Group on the Protection Process completed its task and published its report, and that the first government consultation of its kind in the EU took place with children in the Direct Provision system.

Further resources are required to ensure that the Working Group recommendations that relate to children are implemented. However, the grade remains low because in spite of the report, little changed on the ground for children in 2015 and the promised Integration Strategy has not yet been published.

Census 2011 shows that one in seven children under the age of 14 is from an ethnic minority and/or migrant background. There were more than 1,200 asylum seeking children living in the Direct Provision system in Ireland at the end of December 2015. International developments have seen an increase over the last twelve months in the number of migrant and asylum-seeking families and unaccompanied children in Europe.

There is still no legal framework on the reception conditions of asylum seekers in Ireland, that is, Direct Provision. Ireland has decided to opt out of the EU Reception Conditions (Recast) Directive, which governs reception conditions for applicants for international protection.

This is disappointing as Article 23 of the Directive requires signatories to ensure that the best interests of the child are a primary consideration in decision making and States must ‘ensure a standard of living adequate for the minor’s physical, mental, spiritual, moral and social development.

The average length of stay in Direct Provision is three years and four months but almost 15 per cent of residents have been living in the system for more than seven years. This means that there are children who have spent their whole lives living in a centre, which often involves living in communal or shared accommodation not appropriate for family life.

One of the main recommendations of the Working Group relates to reducing the length of time being spent by people in the protection process and leave to remain stages.

In May 2015, the Health Inspection and Quality Authority (HIQA) issued a report that found that in one year child welfare and protection referrals had been made to Tusla – the Child and Family Agency in relation to approximately 14 per cent of the population of children living in Direct Provision. This represents a significantly higher referral rate than for the general child population of 1.6 per cent.”