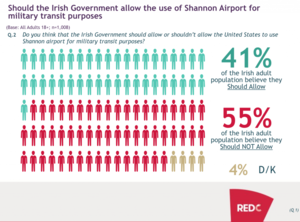 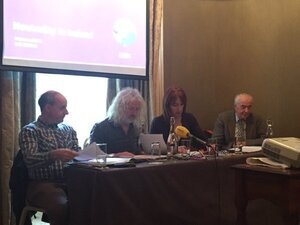 Independent TDs Mick Wallace and Clare Daly released the results of a Red C poll earlier today, which show over half the population don’t agree with Ireland’s current military relationship with the United States – which uses Shannon Airport to refuel.

Some 55% of those polled say they don’t believe that the Irish Government should allow the US to use the Limerick airport for military purposes.

Mr Wallace and Ms Daly held a press conference earlier today with Dr John Lannon and Ed Horgan, of Shannonwatch, at the Buswells Hotel, Dublin, to discuss the poll’s results.

“A country with a policy of positive neutrality would not facilitate the massive, devastating displacement of tens of millions of people through wars whose only purpose is to keep the gears of the military-industrial complex oiled.”

“It would not find itself in a state of absolute moral abjection when it agreed to accept only the tiniest fraction of those made homeless and stateless by wars it had abetted. We need to put meat on the bones of our neutrality, to actively and vigorously work against war and destruction, against the arms trade, against the absolute devastation of so many lives in pursuit of imperial power and wealth?”

“Until we enshrine a policy of neutrality in our Constitution, and make it so that our neutrality is something that is real, positive, and active, we cannot and will not play that role”.

“Since 2001, the US Military and their allies have been responsible for the deaths of over 2 million citizens in Afghanistan and Iraq alone. Mindless destruction of the Middle East region & beyond has seen the displacement of over 30 million people and an unprecedented refugee crisis in Europe today.

“It’s long past time that Ireland stopped facilitating this horror by refusing to allow Shannon Airport to be used for any military purposes. We need a change of direction – It should start with the new Government. It’s time for Ireland to work for peace, not war.”

“Shannon airport has been used, or misused by the US military, with the approval of successive Irish Government’s since October 2001. In the meantime over three million armed US troops have transited through Shannon on their way to and from wars and military operations in Afghanistan, Iraq, Yemen, Syria and elsewhere.”

“In addition US military aircraft have transported unknown quantities of munitions and other war materials through Shannon airport but the Irish Government has been repeatedly denying that these aircraft are carrying weapons and munitions. Irish neutrality needs to be urgently restored to prevent Irish complicity in crimes against humanity”.

Dr John Lannon of the University of Limerick and Shannonwatch, said:

“Ireland’s failure to uphold national and international law at Shannon is shameful. The routine transit of armed troops to and from war zones is in contravention of the Hague Convention on Neutrality.”

“The authorities have failed in their responsibilities under the Convention Against Torture by not investigating rendition planes at Shannon. And they also turn a blind eye to the fact that the US military aircraft landing at Shannon are likely to be carrying people who are guilty of war crimes in Iraq, Afghanistan and elsewhere. Under the principle of international jurisdiction, these should be investigated and prosecuted.”

Who Made The Call And Why?

58 thoughts on “In Case Of Emergency”