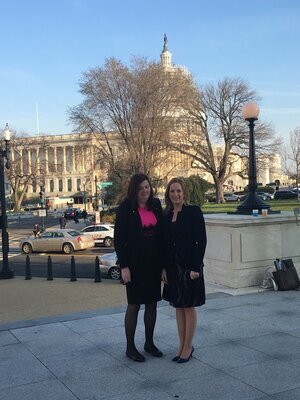 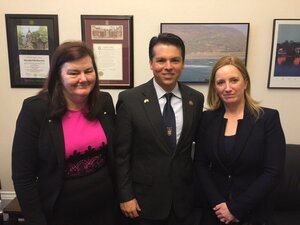 From top: : Ann Doherty (left) and Gemma O’Doherty at the United States Congress and with Representative Brendan Boyle (above).

Congressman Boyle, a Democrat from Pennsylvania whose father is from Glencolumbkille, C0 Donegal, had a lengthy meeting with Ann and Gemma.

He expressed particular concern that Mary’s remains had not yet been found and that her killer is still at large. He has offered to assist them in their search for truth and justice in whatever capacity he can.

Mary Boyle was six years old when she vanished on remote farmland near Ballyshannon, Donegal on March 18, 1977. Her remains have never been found.

Her sister and a number of senior gardai who worked on the case in the period after the murder believe she was killed by somebody she knew and was sexually assaulted before her death.

The officers also allege that a politician contacted Ballyshannon Garda Station in the days after the murder and requested that certain people not be considered suspects.

“It was a pleasure to meet Congressman Boyle today. He listened with compassion and interest to our testimony about Mary’s death and was most concerned. He has great affection for Donegal – his father’s homeland – and that is obvious not least because of the large picture of Glencolumbkille on his office wall”

“Having spent a number of days in Washington meeting politicians and others, I’ve have to say I have encountered more concern for my sister here than in the corridors of power in Ireland where Frances Fitzgerald and Micheal Martin both refuse to meet me.

I hope Irish-American politicians can use their influence now and encourage the government to set up an independent inquiry into the allegations of corruption in the case and also to impress upon Garda Commissioner Noirin O’Sullivan that an arrest of Mary’s killer is long overdue.”

On the first day of their trip to Washington, Ann and Gemma met with former congressman and human rights lawyer Bruce Morrison and Fr Sean McManus of the Irish National Caucus who has been very supportive of Ann in her fight for justice.

PSNI Chief Constable George Hamilton and chair of the Northern Ireland Policing Board Anne Connolly were also informed about the case, including allegations of Garda malpractice in the investigation.

They have agreed to meet Ann and Gemma in the coming months in Belfast.

9 thoughts on “A Hearing On Capitol Hill”