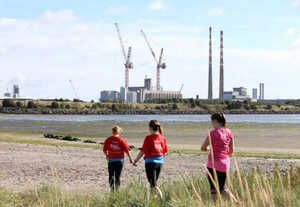 Strange things are going on

As the economy gains momentum, investment is actually declining

During the Cold War, lack of reliable information about Soviet Union politics forced Western analysts to seek out alternative signs and portents: the removal of portraits, the rearranging of chairs, positions at the reviewing stand for May Day parades, the choice of capital letters in official titles, how many times a Politburo member’s name was mentioned (or not mentioned) in the official press.

This was called Kremlinology. The Germans had another term for this – Kremlin Astrology due to its vagueness and ambiguity.

The Irish economy is not a million miles away. The official data is there aplenty but it is telling us less and less about what’s really going on. For instance, we have the fastest growing economy in Europe. But as we saw here, employment growth is rapidly falling off. What does that tell us?

Here’s another sign and portent: investment. In this post I charted the long-term investment deficit – a deficit that didn’t get much attention in the general elections debate (scratch that; it got no attention at all). Yet investment is the fundamental driving force in long-term sustainable growth.

When we look at recent investment level we find an even stranger thing going: as the economy gains momentum, investment is actually declining. Just as we did previously, we will look at investment excluding Intellectual Property (IP).

IP inflates investment numbers without necessarily contributing to growth. Multi-nationals are re-locating IP activity into Ireland from tax haven locations. But to what extent this is making any real contribution to growth-generating activity is open to question. In 2013 70 percent of industrial R&D investment came from just three companies.

This was during a period when GDP and GNP growth was enjoying double digit numbers.
We can get a sense of this by looking at the raw numbers:

When you strip out IP, investment in the economy fell by €1.8 billion over this period.
Not all economic activity in IP is due to accountancy practices or transfers by multi-nationals.

There is real activity here bringing benefit to the economy. But how much? It is difficult to even guess. However, this gives us some idea.

We should expect investment to rise in the future (when IP is stripped out), mostly due to a rise in construction investment. Investment in dwellings remain depressed, both in the private and public sphere as we are aware of.

However, a key category is the machinery and equipment items – tangible assets. If this category continues to fall or stagnate this is a sign of a business sector that is not expanding.

In short, despite growing GDP we have falling investment and falling employment growth. And here’s one more curve, as pointed out by a good friend who keeps an eye on these things.

This seems contradictory as PRSI is levied on PAYE and self-employed income.

There are a couple of explanations for this – notably that the Department re-allocates these monies later in the year. This would mean lower income tax revenue but higher PRSI revenue to the extent that they dovetail. We’ll keep a watch on that.

Michael Taft: Getting It Wrong On Welfare

11 thoughts on “The Astrology Of The Irish Economy”