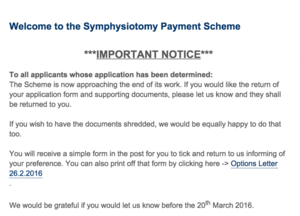 The scheme, which has accepted 578 applications and made 400 offers of compensation, is due to finish soon, but Judge Harding Clark has denied saying documents would be shredded after March 20th, as has been claimed.

She said applicants had been asked to state by this date whether they wished their documents to be returned or confidentially shredded.

“When the scheme has completed its work, it will return or confidentially shred documentation furnished to the scheme by applicants strictly in accordance with the wishes of the applicants,” she said in a statement posted on its website.

…It [Department of Health] said applicants had been written to and asked whether they wanted their documents back or would like to have them shredded. About 360 women had replied, with 70 per cent opting for return and 30 per cent for shredding. It is unclear at this stage what will happen in the cases of women from whom no reply has been received.

The Dept’s disinformation has been second to none! Take one example! Almost 750 applied to the scheme, not 578 as claimed by #roinnslainte!

Claim by Department they don’t hold originals is a red herring. Copies may be only records left #returntherecords #symphysiotomy #shredding

Symphysiotomy records to be shredded ‘with consent’ (Irish Times)

Previously: ‘Any Applicant’s Mind Can Be Put At Rest’

“All The Evidence Points To A Systemic Cover-Up”

‘Any Applicant’s Mind Can Be Put At Rest’

‘The Fact Is: Medical Records Are Missing’