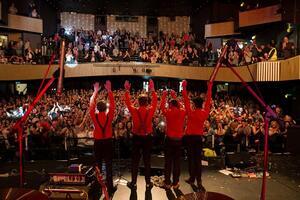 The Frank and Walters – We Are The Young Men

01. As synonymous with the real capital’s culture as Tanora, Roy Keane, and  the English Market, The Frank and Walters are one of the quintessential Cork bands, formed in 1990 and named after two local eccentrics of the day.

03. Taking a sabbatical after a busy few years, the band returned in the mid-nineties and have been gigging and releasing records at a steady clip ever since. Having celebrated their 25th anniversary last year with a sellout performance at Cork Opera House (pictured above), the band is currently readying new album Songs for the Walking Wounded for release via drummer Ashley Keating’s FIFA Records.

04. Streaming above is the band’s new single, We Are the Young Men, released ahead of the album’s launch at the Cork Opera House on April 15th. In support are reunited Cork indie group Rubyhorse and The Smiths’ Mike Joyce on DJ duties.

Verdict: A seemingly jaunty, jangly tune, layered with subtle sarcasm (a Franks specialty) and casting a somewhat cold eye on youthful exuberance. Great stuff from a band that’s stood the test of time.

The Frank and Walters

Photo: Kieran Frost. Thanks to Peter Dempsey for corrections.

12 thoughts on “You May Like This: The Frank and Walters”