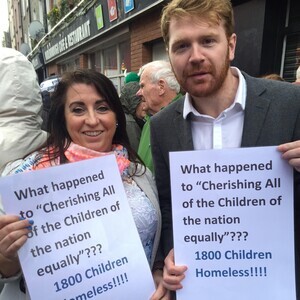 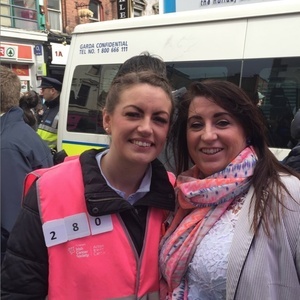 How do you celebrate the birth of the Republic when its ideals have essentially been cast aside by successive Governments.

I want to celebrate it. I, quite literally, was raised on songs and stories about heroes of renown. I could spit from my house to Kilmainham Gaol and many afternoon strolls with my dad ended with a pint in The Patriots Inn.

Luke Kelly’s Foggy Dew was the background to many a family evening. I was surrounded by and steeped in the history, the heroism and the patriotism of those who fought and died for the cause of Irish freedom in 1916.

Last Sunday I walked up Patrick Street following the Military parade and feeling a real sense of occasion. I got to College Green and I stood and watched the big screen as Captain Kelleher read the Proclamation to a deathly silent Dublin city.

I won’t lie, I shed a tear. It was a powerful moment that will stay with me for the next hundred years – and that was the point wasn’t it? – to create a memory of our past for the current generation and to keep our history alive within us. In my case, it worked.

From College Green I pushed past the throngs of people and circumnavigated the various barricades and found a circuitous route to Marlborough Street where people were gathering to highlight another facet of our nation’s legacy – our homelessness crisis.

Erica Fleming, the young mother who featured on RTÉ’s documentary ‘My Homeless Family’, had organised the protest to lay bare the stark reality between the Republic that was proclaimed in 1916 and the Republic we find ourselves living in today in 2016.

While those dignitaries who were actually allowed onto O’Connell Street on the day sat and celebrated the visionary men and women of 1916, just two streets over we stood and lamented the fact that their vision has never been achieved.

Never was that more manifest for me than standing surrounded by parents and their children who had arrived from various hostels and hotel rooms across the city while a triumphant flypast soared overhead.

There has been harsh criticism in recent days of those of us who sought to use the words of the proclamation to highlight its unfulfilled promise.

They shout at us about it not literally meaning children when it spoke of cherishing all the children of the nation equally. Well d’uh, but you know what – those visionaries certainly weren’t excluding actual children from that phrase and why wouldn’t you use it to highlight the horrific injustice of 1800 of our children living in a 2016 Republic without a home?

When they spoke of cherishing the children they referred to every person in Ireland, the 1800 homeless children are just the tip of the iceberg, if we take it at its most literal and use it to highlight where we have failed across the board then your eyes would water.

It has therefore made very little sense to me that those detractors would seek to jeer those of us using the ideals of the proclamation to make a statement about the absence of those ideals from our society today.

So my conflict was thus – I wanted to commemorate, I wanted to remember, and I wanted to burst with pride in memory of our strike for freedom and the brave men and women who made the ultimate sacrifice to deliver the Irish Republic.

I also wanted to shout from the rooftops about how we have failed to deliver that Republic, how a Republic that fails to ‘cherish all the children of the nation equally’ is one not worthy of the name, and how I felt hypocritical celebrating the birth of that Republic when its ideals have essentially been cast aside by successive Governments.

I’m not filled with romanticism for the 1916 figures, I realise that their beliefs and many of their aspirations were founded in conservative religious ideologies that I would eschew and which – as DeValera’s reign proved – had a warped vision of what equality actually was, however, their words and actions about equality and civil and religious freedoms, taken separate to their own personal beliefs, were visionary and 100 years later I still desire a Republic based on those ideals.

So while I honoured and commemorated the events and the people, I celebrated the vision not the delivery and that allowed me to stand side by side with Erica and my colleagues and continue the fight that began 100 years ago – the fight for the delivery of a true Republic

51 thoughts on “Tears For The Republic”