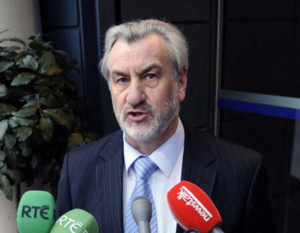 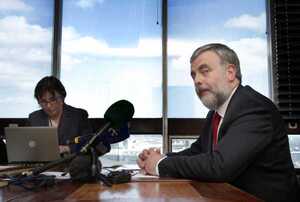 Further to the Luas strike brouhaha…

Mr Mulvey went on Morning Ireland after workers rejected a resolution proposed by the WRC.

He told Morning Ireland that the union Siptu hadn’t been in contact with him since the proposal was rejected and that he didn’t know why the workers rejected the proposal.

Following Mr O’Connor’s call for Mr Mulvey to step down, Mr Mulvey went on News At One and spoke to Conor Brophy.

Kieran Mulvey: “I was fulfilling what I believe is my role to point out where the parties could potentially go in this dispute to solve it – it’s affecting 90,000 people every time there’s a stoppage in the Luas. The institutions of the State have been used for dispute resolution. What I was clearly indicating to everyone who wanted to listen and to really understand what I had to say was that there wasn’t much more to be done on this dispute. That the parties really need to convey to us what precisely is wrong at the moment and effectively to say that we’re still available to do this but I also did say that, you know, on both sides, I was applying it to both sides, we need leadership…”

Conor Brophy: “But can we look at, just, one of the comments in particular that you made this morning, you said of the services being disrupted, it’s not being disrupted by the company. We’ve seen this to particularly antagonise Jack O’Connor – was that an unwise comment to make?”

Mulvey: “Well I was only pointing out a fact of life here. That the reason..”

Brophy: “But could that not be construed though as being partial and isn’t that a problem for someone in your position?”

Mulvey: “It isn’t, no. Jack O’Connor made a number of remarks this morning and I’d like, on the stage and I’d like to say what I think of them: one is he mentioned a number of inaccuracies. He said I intervened prematurely in this dispute. I intervened at the behest of both SIPTU and Transdev and the minister to call the parties back. They were on the airwaves demanding to come back. That’s what I did. I also, in order to get that dispute into a space in which we could engage in negotiations, I directly called on Transdev to stop hiring buses that would only escalate the situation and the unions, in response, and I thought it was a positive gesture, called off the St Patrick’s Day dispute. I didn’t ask them to do anything beyond that. What I tried to do is create the conditions. Secondly, he said by my premature intervention in this dispute, after we had been involved for a number of months in this dispute, my premature intervention seemingly put off side some initiative that was being taken that nobody seems to know about by the Irish Congress of Trade Unions and certainly I wasn’t aware of and if I had been aware of, naturally, as I’ve done in the past, with ICTU, IBEC, the Government or wherever, I would have sat down with the parties and see whether that is a way of going forward or not..”

Brophy: “I should mention at this point, you mentioned Patricia King, the general secretary of the Irish Congress of Trade Unions as potentially having been working on some proposal, we have made efforts to contact Patricia King, who wasn’t available and…”

Mulvey: “Well, look, in fairness, I have worked with Patricia King over the last 25 years, she’s a superb union representative and superb public official.”

Brophy: “Suffice to say, you weren’t aware of any such proposal?”

Mulvey: “Not at all, like I mean, I can’t go out into the ether and find out what’s going on in people’s brains in these matters. But other, Jack O’Connor then went on to make a number of personal attacks on me. Now I’m not getting in, I never in any dispute in the last 25 years, I’ve been chief executive of the Labour Relations Commission, I am also now director general of Workplace Relations Commission. To make a number of personal comments, regarding me, on this station and on other stations, I do not get involved in personal disputes and I do not make personal attacks. And anybody who knows me knows that for the last 25 years. I am, I don’t descend to that, I was told then, I was the teachers’ conference as if somehow I’m responsible for the problem. When I was a representative for teacher unions for 15 years and I doubt there’s a teacher or academic in this country who’d criticise what I achieved for them: so let’s clear that as well. Let’s get back to the real issue here. It is the Luas dispute, the Luas dispute can only be resolved by negotiation and in order to complete the negotiations we’ve been involved in, we need to know what the issues are that are unacceptable to the workers involved. And, secondly, we need to know are the company in the same space. We’re not a million miles from resolving in this dispute. But we can’t have negotiations where, at some stage, we’re following the wrong track or we’re give the wrong direction.”

Brophy: “Was that what motivated you to come on the airwaves in the first place? Cause I’m sure some people will say maybe the better thing to have done would have been to save your breath, cool your porridge at this point, just let it pan out for some time, let things cool down and wait for one or ether of the parties to make a move.”

Mulvey: “I’m not cooling any porridge, I’m just concerned about 90,000 people on Saturday and Sunday who can’t get about their business and who next week can’t get about it either. These are 90,000 citizens of this state who are going to work, going to hospital, going to schools, going to college, I’m a public official, I’m obliged under the statutory provisions of my act to take into consideration the public. This is not always about employers or trade unions.”

Brophy: “You say that the sides weren’t a million miles apart though but only two of the 167 members voted in favour of the deal. It was then subsequently labelled, again by Jack O’Connor, as a ridiculous proposal, that no trade union member would have voted to accept. That suggests that there might be a few more miles between the parties than may originally have been, appeared to have been the case.”

Mulvey: “Well, look, that’s an opinion expressed by Jack O’Connor. I’ve been involved in negotiations on Haddington Road, in Croke Park and Lansdowne Road on myriad of rescue negotiations, in a myriad of companies involving SIPTU and its predecessor the Irish Transport and General Workers Union, the FWI. What came out of the commission is not greatly different that has come out from an awful lot of disputes. And what came out of the commission was in negotiation, the cut and thrust of the parties in there who were there for a considerably long time. It is about our tenth intervention in this dispute apart from two visits to the Labour Court regarding it.”

Mulvey: “In all my career, 41 years, I have a track record of defending workers’ interests and rights all through those years. And I won’t be told by anybody, irrespective of the position, that I’m biased.”

Brophy: “Have you spoken to Jack O’Connor since this morning?”

Brophy: “In the meantime though, in terms of your position and that of the WRC, are you, regardless of the fact that you’re not going to resign, are you kind of in an invidious position here in that your partiality has been called into question?”

Mulvey: “No I don’t accept that and I don’t accept the basis of that and I thought it was a bit disingenuous. Jack O’Connor knows I’m retiring in the first week of June, it was publicly announced on one radio station today, it’s no kept secret. The problem here, you won’t have it after June.”

Meanwhile, On The Green Line