“We are going to get to a situation in the next few weeks where it’s close to bursting and where there’s not enough capacity on public transport.

“We’ve increased the capacity to 50% which will mean a lot more people can get on the buses and the trains but to match that, to protect people’s health, we’ve made mandatory face masks so everybody getting on to public transport in the next few weeks or days, they’ll have to wear a face mask.”

And good luck with that. 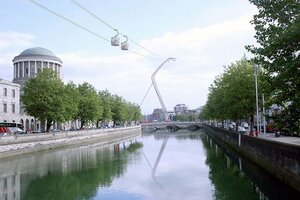 The initial ‘Celtic Tiger’ period of the 2000s threw up a colourful variety of proposals for the Liffey Quays, Dublin, including the ‘Suas’ cablecar. See more here – https://t.co/VoAolcXbUO pic.twitter.com/tu58Wzmhms

We dared to dream big, in fairness.

Previously: Whatever happened to… Cable cars suspended hundreds of feet above the River Liffey? Not all bad then. @Luas why is your LUAS every morning this week pulling off when people are running to it? A train pulls up and 30 people are getting off, and your luas pulls off as they get to it , leaving everyone standing at broombridge for 12 minutes until the next one comes along.

Your drivers can clearly see people running across the footbridge and down the steps, but pulls off, wheres the common sense and decent courtesy? It’s not as if there is another one, they are 10-12 minutes apart.

@Luas Could you please explain why the @Luas train leaving Broombridge at 9.36 didnt let people in who just arrived with the M3 Parkway train? We stood on the platform for 10 seconds and couldnt open the doors. Very frustrating. Via Eye on Dublin

Luas at max capacity years before anticipated. Build it and they will come a truism here. Dublin metro should be built and Luas extended https://t.co/WN3AC7SJdp 8.53am (top): Luas tweets about a broken down bus on Dawson Street, Dublin 2.

In the meantime, Luas trips from Sandyford to Stephens Green take an hour and a half, despite that being the actual route for years.

How does it take 2 hours to get a tow truck to a bus on Dawson street? Not a rhetorical question. But what about the mouth breathing women?

I’m more concerned about the people who don’t brush their teeth and insist on breathing through their mouth instead of their nose.

I actually got up and moved seat when a woman and her friend whose conversation not only nearly burst my eardrums, also nearly knocked me out with the nauseating smell from her unclean mouth.

Also women putting on a tonne of body spray is only creating a different problem. A plume of different artificial smells each so different from the next.

As someone with a sensitive nose this usually makes me sneeze.

Yesterday: Hum ON The LUAS