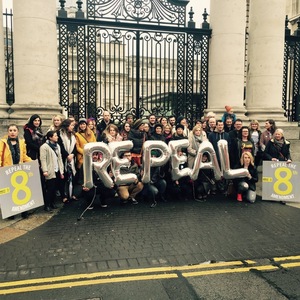 Every weekday at 1pm pro-choice activists are assembling outside government buildings to urge a repeal of the Eighth Amendment, in a protest organised by Amnesty International.

Who knew the American anti-choice brigade were such wimps? Don’t they have the courage of their anti abortion convictions?

Donald Trump came out with the logical deduction this week that, if we view abortion to be a crime against an innocent being, then it follows that women who commit this crime should be punished for it.

Yet they all seemed shocked and terribly upset that the man could even think such a thing.

Trump had to do several U-Turns and admit that criminalising women for having abortions was never going to be a winner – not even in the most rabidly anti-choice states.

To which the million, trillion dollar question must be; “Why not?”

If anti-choice groups believe that abortion is murder – as they tell us all the time – then surely justice demands that a woman who procures one is a criminal – of the worst kind – and must be punished accordingly?

The anti-choice lobby are made of much sterner stuff over here. Up until 2013 abortions were punished under the archaic 1861 Offence Against the Person Act. A woman who “procured” one could get “penal servitude for life”.Yes, as I said, archaic.

And so in 2013 the Fine Gael/Labour government replaced this life sentence with… up to 14 years in prison for any woman who had an abortion in this jurisdiction.

Maybe Donald Trump heard about this on his last visit here – the one where they rolled out the red carpet and the Irish colleens for him.

But no-one will ever be sentenced, say our own home-grown anti-abortion rights groups. Really?

Well, yesterday in Northern Ireland, where they still apply the old Offence Against the Person Act, a 21 year old woman was given a three month suspended sentence because she had bought drugs online which induced a miscarriage.

She hadn’t enough money to travel to the mainland and abortion is still illegal in Northern Ireland. While she was suffering this awful trauma her housemates called the police – I kid you not – and she was then subjected to an investigation which found her guilty of a serious crime.

Many people in Ireland don’t know that we introduced a 14-year sentence when the Protection of Life during Pregnancy Bill was brought in.

Actually less than one in 10 of us are aware that a woman who has an abortion could face a 14-year prison sentence. But I bet every single one of those 12 women who leave here each day to travel abroad for medical care they are denied here, do.

They know damn well what the consequences are.The logic seems to be that if they do their “dirty work” in a different country it isn’t classed as a crime at home.

But then we realised that we couldn’t jail everyone for travelling out of the country, so the “right to travel” as well as the “right to information” [about abortion] was decriminalised.

Which was great, because it meant the customs lads didn’t have to confiscate every copy of Cosmopolitan that came into the country (with ads for Marie Stopes clinics in the back pages).

But it’s still a crime to have an abortion in Ireland – unless your life, as opposed to your health, is at risk. This, despite the fact that two thirds of people living in this country want abortion to be decriminalised, according to a recent Red C poll commissioned by Amnesty Ireland.

Asked whether the Irish Government should decriminalise abortion, 67% agreed and 25% disagreed. And 81% are in favour of significantly widening the grounds for legal abortion access in Ireland.

Yet repealing the 8th amendment [which criminalises abortion in all cases except when the life of the mother is at risk] is not part of any of the main parties agendas as they discuss forming a government.

And so currently, Amnesty Ireland – and a whole host of other people – are staging a series of protests outside Government Buildings.

Every day the 12 women who leave the country to avoid a possible 14 year sentence are represented in a lunchtime vigil.

The numbers participating are growing and the tone of the gathering is upbeat and positive. We know that we can’t be ignored forever. If we want to call ourselves a functioning democracy we will have to have a referendum soon on repealing the 8th amendment. It’s that simple.

So, come on down and join us. Every day at 1pm. At Government Buildings. Bring your mates. Bring your Mammy. Bring your lunch. Or coffee. Or even cocktails if that’s what you’re into. We had balloons on Sunday. And chocolate cake.

Maybe some local businesses would like to send us down tea and sandwiches, or coffee or, dammit okay, cocktails would be fine too. We’re not going away you know. Because if even Donald Trump realises that criminalising women for having much needed abortions is disgustingly inhumane, cruel and unjust, then why can’t we?

Carol Hunt is a 2016 Seanad candidate for the NUI panel. @carolmhunt 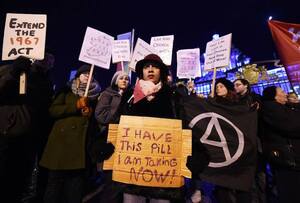 The Berlin-Irish pro choice solidarity group are holding a protest [details below] outside the British Embassy today, Tuesday at 5pm  to voice anger at the suspended  sentence handed down to a 21-yearold Northern Irish woman who miscarried after purchasing abortion pills online.