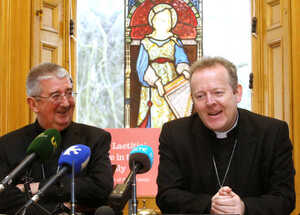 Archbishops Diarmuid and Eamon Martin speaking to the media on the publication of a new Apostolic Exhortation Amoris Laetitia, The Joy of Love: On Love in the Family (published by Pope Frances today) in the Archbishop’s House, Drumcondra, Dublin

Homosexuality was another hot-button issue, and Francis took his cues from the majority view in the synods. (During the first synod, an interim report written by a committee of bishops used language that was strikingly welcoming to gay people, but it received so much criticism from other bishops at the synod that it was gone by the final report.)

Echoing the report issued by the second synod in 2015, Francis’ exhortation says that “every person regardless of sexual orientation” should be treated with respect and consideration, while “every sign of unjust discrimination is to be carefully avoided, particularly any form of aggression and violence.”

But in the next section, he states categorically that the church cannot countenance same-sex marriages or unions, citing the second synod’s final report, which said “there are absolutely no grounds for considering homosexual unions to be in any way similar remotely analogous to God’s plan for marriage and family.”

This is a missed the opportunity to reflect and embrace the very positive changes in attitudes towards lesbian and gay people that have come about over the last 20 years in Ireland and across many parts of the world.

The Pope, as the leader of the institutional Catholic Church, could have dismantled a key element of the ‘architecture of homophobia’ which comes from the Church’s teachings on LGBT people.

The new document speaks of compassion but the message about LGBT people that it contains is still a negative one, and will be felt by many, in particular LGBT Catholics and their families, as a hurtful one.

Negative attitudes can feed a culture of hostility and as the recent LGBTIreland research showed such intolerance can cause real harm to the mental health and well-being of LGBT people, particularly young LGBTI people.

While movement on the Catholic Churches discrimination against LGBT people is progress, the challenge remains for the institutional Catholic Church not to be an agent of homophobia and transphobia.

The risk of this new document is that it will entrench views among some that LGBT people are somehow lesser and should be treated as such. This doesn’t reflect what the Irish people said last year in the marriage referendum, the majority of whom were Catholics.

Your Pixel Pontiff Has Arrived

38 thoughts on “Failing To ‘Dismantle The Architecture Of Homophobia’”