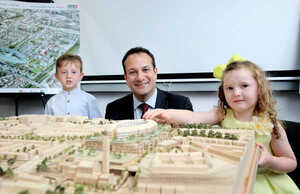 From top: Health Minister Leo Varadkar with the proposed site of the Children’s Hospital with Nathan Evans (left) and his sister Olivia; Dr Rory Hearne

Ours is a deeply unequal health system where sick children who are reliant on the public system are left waiting for months and even years while children whose families can afford it are avoiding the waiting lists and accessing care through the private system.

The numbers of people on hospital waiting lists in this country are truly shocking. There are now almost half a million (that’s ten per cent of our entire population!) waiting for various forms of treatment or assessment in our public hospital system.

If we look at children specifically we can see that the numbers of children waiting to be seen in hospital day cases has risen by a third (33.7%) in just over a year (from December 2014 to March 2016).

Meanwhile the number of children on inpatient (often surgery) waiting lists has increased by 18% in the same period.

This shows just how far away we are from putting in place the aspirations of the 1916 Proclamation that aimed to cherish “all children of the nation equally”.

So while the state splashed out on the recent celebrations and commemorations over ten thousand sick children (11, 145 to be exact) are waiting to be seen for an appointment in our public hospitals.

What a Republic to be proud of!

While most of the media coverage so far has looked at the overall waiting lists numbers, including both adults and children, I have analysed the waiting list figures released by the National Treatment Purchase Fund to look specifically at the numbers of children who are waiting to be seen in our hospitals. I also looked back at the figures for 2014 to see how the waiting lists have changed.

The graph below shows that things have worsened considerably in quite a short space of time. We can see that the numbers of children waiting over six months on day case lists has increased by three quarters (75%) from 1675 to 2944. While there was an increase by 40% of children waiting longer than six months for inpatient care.

Just stop and think about this for a moment. Six months is a substantial length of time in a child’s life. As a parent I know about the reality of waiting for health care (in particular for dental treatment) but fortunately my children have not required to be on a waiting list for something very serious.

I can only imagine the stress and worry on those parents and the needless suffering of children waiting month after month and in some cases, over a year, to be seen in a hospital for illnesses relating to Ear Nose and Throat, Respiratory illnesses, Cardiology, Surgery, Orthopaedics and even Radiology. 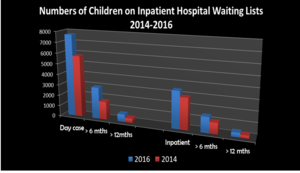 The waiting lists differ from hospital to hospital. In the graph below I show the hospitals with the highest waiting lists in 2016. We can see that for hospitals like Our Lady’s Hospital Crumlin the numbers of children waiting for day cases increased by 43%.

Some of our regional hospitals like Galway and Waterford are also notable for their high waiting lists and significant increases over the last year. 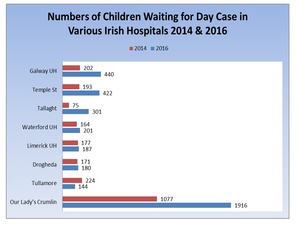 The reasons for waiting lists are complex but there is no doubt that the austerity cuts and the failure to provide sufficient funding to our public health system is a large part of it.

There has been some debate in the media recently about the “high” level of spending on our health services and the resultant claim that the system is the problem.

But the system is in chaos – with underpaid staff, closed beds, inadequate facilities – not because of the lack of effort or capabilities from the people working in the health system but due to its chronic under resourcing.

If we look at the actual numbers we can see from the graph below that Ireland’s spending on health as a % of GDP at 8.1% is below the OECD average of 8.9%.

This means that only 5.5% of GDP is spent on public health care in Ireland versus 7.3% in the UK. 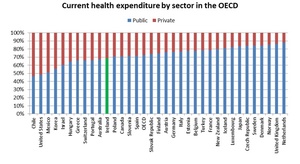 We can see that a relatively high proportion of spending on health in Ireland is private. This means that access to health care in Ireland is strongly influenced by private individuals’ and families’ ability to pay for it privately.

The public health system in Ireland does not provide universal comprehensive accessible healthcare like the National Health Service in the UK. So those who can afford it are clearly buying a greater access to healthcare than lower income households in Ireland through the private hospitals and clinics (who highlight this point in their advertising).

Also people who don’t have a medical care or health insurance are charged for use of the public system as well.

This is a deeply unequal health system which results in these massive waiting lists and the inequality whereby sick children who are reliant on the public system are left waiting for months and even years while children whose families can afford it are avoiding the waiting lists and accessing care through the private system.

This can be classed as nothing other than an apartheid health system. This is grossly unfair and unequal. It is reinforcing an already unequal society for tens of thousands of children.

The waiting lists show that we need a properly funded universal public health system that can provide equal and timely access to high quality treatment for all our citizens.

The public demonstrated in the recent election that would rather forego tax reductions such as the USC in order to see a properly funded universal health system.

So whatever never government is formed has the public support to do it – it just has to have the political will to implement it.

Deprivation In The Unequal Recovery

44 thoughts on “Health Apartheid For Our Children”