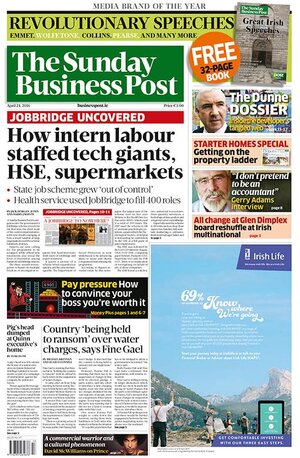 …the largest user of the [JobBridge] scheme over its five-year lifetime is the Health Service Executive (HSE), which used it a total of 399 times. The HSE used the scheme to fill 67 assistant psychologist positions, a grade which the Psychological Society of Ireland is demanding be established by the HSE as a full grade of paid employment.

…The scheme was also heavily used by a wide range of state bodies amid a hiring moratorium imposed during the economic downturn, with state bodies accounting for eight of the top 20 users of the scheme.

All employers contacted said that they stood by their use of the scheme and praised its usefulness.

In a statement, the largest user, the HSE, defended its use of the scheme.

It said that it made a decision at a national level to use the programme to support government policies around unemployment and job creation.

“Due to the moratorium on recruitment, services such as psychology and speech and language therapy were diminished during this period. The scheme provided an opportunity for graduates to gain valuable clinical experience in their chosen fields, while at the same time delivering much-needed services to service users during the period of the JobBridge internship,” it said.

The Department of Social Protection is undertaking a review of JobBridge, but it is understood to be advancing plans to name and shame those found abusing the programme.

A full Sunday Business Post database of the companies which offered 46,000 JobBridge placements can be accessed here

Meanwhile, At The Car Wash

And All The Batterburgers You Can Eat

Old Man Look At My Life