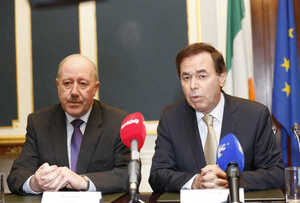 Further to the O’Higgins Commission’s report being handed to Justice Minister Frances Fitzgerald yesterday, which hasn’t been published yet…

The unpublished report said he had very substantial concerns and had displayed active and personal concern.

Given that most of the allegations had been examined or were previously reviewed, the actions of the then minister were amply justified, it believes.

In relation to the former garda commissioner, Martin Callinan, the report states that clearly and unambiguously there was not a scintilla of evidence to support any allegation of any type of corruption.

The commission found that any aspersions on his integrity were unfounded and deeply hurtful.

It also said that exchanges between the garda commissioner, the justice minister and the Department of Justice were at all times professional and appropriate.

The O’Higgins Commission of Inquiry also found that garda whistleblower Maurice McCabe acted out of genuine and legitimate concerns.

It concluded the garda sergeant showed courage and performed a public service at considerable personal cost.