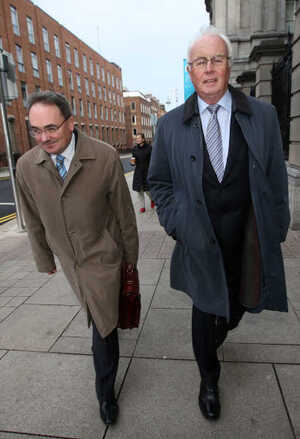 NAMA is worsening our housing crisis by selling  housing and land to vulture funds.

So the rich are just getting richer in Ireland while the poor remain poor. But the wealth at the top in Ireland is really staggering.

The latest Sunday Times Rich list shows that Ireland’s 250 richest people now hold €72.6bn. Their combined wealth is equivalent to a third of Ireland’s GDP. The top 12 individuals have a combined wealth of €34bn.Their wealth rose by 3.3% in the last year (€1.8bn).

Why this matters is because lower income and middle classes are getting a smaller slice of the pie as increasingly the wealth being created in society is going to the top. The result of this unequal distribution of wealth is our huge rates of poverty.

There are now 138,000 children living in poverty in this country. There are 912 families with 1,881 homeless children. Surely it is time to ensure a more equal distribution of wealth that would involve an increase in tax on the top wealthy in order to pay for housing for our homeless or higher welfare for our poorest families to lift them out of poverty?

Another area where wealth is being accumulated by the already super rich on the backs of ordinary Irish people is through buying up and selling on property from NAMA.

The vulture funds such as Goldman Sachs and Lone Star are lining up to buy NAMA property and loans.

NAMA is selling two portfolios of loans and assets which have a combined value of €4.7 billion.

These include, according to the Irish Times, 950 residential properties, mainly apartments, 650 of which are occupied by tenants and a further 300 vacant.

So hang on a minute! Yes, you read that right. NAMA is currently selling 950 apartments to the vulture funds. And what’s worse 300 of them are vacant.

Surely the government should stop NAMA selling these off or Compulsory Purchase them in order to use them instead to address our homeless crisis? The 300 vacant properties could be immediately used to address the crisis for 300 families.

There is a need for a spotlight to be put on NAMA and how it is currently worsening our housing crisis by selling much needed housing and land to vulture funds.

Remember we own NAMA! It is a state owned body. So there is no reason why we can’t direct NAMA to use its housing and land to address our housing crisis.

We are again giving away our assets, just like we gave away our gas and our fisheries to international corporates.

What is it about us? Do we want to be a permanent colony of international finance?

Do we have something in us that has no confidence in our own capacity and capability to provide for our citizens?

We have got to the point of dependence on international investment that we can’t do the most basic things ourselves like use our assets (land and housing) held by NAMA to house our people who need homes?

The vulture funds buying up our housing, property and land have been more active in developing countries for a number of decades. If you are interested in finding out more about the dangers and problems associated with vulture funds there is a public talk being held on the topic by the Debt and Development Coalition on Wednesday next week.

Mick Byrne, will present the findings of a new Report that looks at the risks posed by vulture funds in Ireland, the experience of the Global South and the role that is being played by the Irish Government.

Tony Romano of the US housing rights organisation Right to the City will also be there to talk about how tenants in the US have been affected by the vulture funds who have bought their buildings. Details here

Gone on 21st Count in #Seanad16 Thank u! All citizens shud have vote in Seanad.Time 4 housing rights &equal Republic pic.twitter.com/ar6BY14vKf

39 thoughts on “Stop These Men”