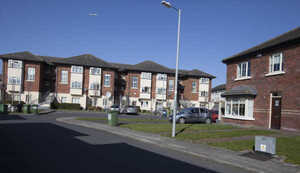 Have we any protection?

Up to 200 Tyrrelstown residents now face eviction from their homes.This is because Goldman Sachs bought from Ulster Bank a loan to property developers Michael and Richard Larkin. The loan is secured on their Cruise Park development.

The key aspect of the deal with Goldman Sachs is the sale of 208 houses, which means that families that have rented these homes for up to ten years must now leave.

An interesting element in this story that has not received much attention is the fact that it is a pan-European issue. In other words, the situation we face in Ireland is similar to that in a number of other countries.

How did we end up there?

When the financial crisis struck in 2008-2009, banks throughout Europe realised that they had made a bunch of bad loans. We’re familiar with the likes of Anglo Irish and a string of bad loans to developers and builders, but the phenomenon was replicated elsewhere, in places like Spain for example, which also saw a massive housing bubble grow to dizzying heights before collapsing abruptly.

In the wake of the crash, European governments set up ‘bad banks’ (NAMA is ours) to buy the bad loans of the banks.

The ‘bad banks’ are now trying to sell those loans to global private investors. Because a lot of the loans are tied to properties, when a global investor buys a package of loans, some control over the properties comes with it.

In Europe as a whole, ‘bad banks’ like NAMA hold about €264 billion of real estate assets that will be sold to private investors within the next decade. It is estimated that 51% of these assets are residential properties, 31% commercial properties, and 18% development and land. The bulk of the assets are located in Spain, the United Kingdom and Ireland.

There is a very good short report here  describing all this.

All those are at various stages of selling their assets, a process which is expected to continue strongly in the coming years. 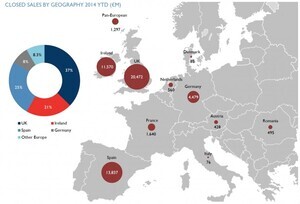 The map (above) shows all the sales of such loans for the year 2014. The UK, Spain and Ireland account for 83% of the sales.

The main buyers of the assets are private equity firms, mostly from the United States, but also from Europe.

Examples include Lone Star, Cerberus, CarVal, JP Morgan and Deutsche Bank. The assets are also purchased by Real Estate Investment Trusts (REITs), which are real estate companies in which global investors can take shares and receive dividends from the rental income generated by the properties owned by the REIT.

REITs are attractive because they pay little or no corporate taxes. Spanish and Irish REITs have been particularly active recently to channel investors’ global funds into European property.

But this is not all. In fact, the total value of real estate assets available in Europe for investors to grab is about €531 billion.

This includes the €264 billion above but it also adds the assets held by banks not formally part of bad banks. There’s a very good short report on this here.

When global investors capture properties anywhere in Europe, there is a risk for the occupants. Some countries offer more protection to them than others, however.

For example, the Sunday Business Post mentioned that what is happening in Ireland, with tenants facing eviction in Tyrrelstown and elsewhere, would never happen in Germany, where they are better protected.

Once again, it all boils down to the balance of power between people and corporations: Ireland caters to the needs and interests of global investors; but it should look after the needs of the people instead.

42 thoughts on “The Swoop Of The Vulture”