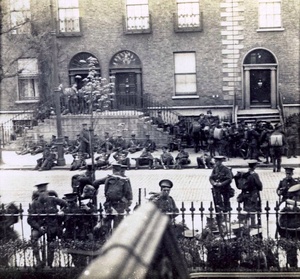 So callow they thought they were in the Western front.

[A poppy wreath dedicated to the members of one British Army regiment who lost their lives during 1916 has been removed]. It seems the Battle of Mount Street Bridge is still raging on….Beggars belief that these anyone would desecrate a memorial of 1916.
But at the same time, it’s a typical republican attitude of ‘our way or no way’ and trying to destroy any reparations between our two nations that the rest of us, the vast majority, try to encourage…

Previously: Dazed In The Hood