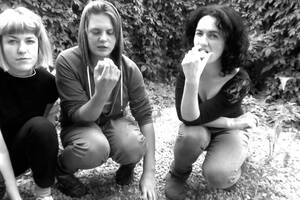 Crevice: Playing Bello Bar tonight in Dublin, Cork improv trio Crevice (pictured) bring their voices together with layers of electronics, to create shifting, undulating soundscapes. Featuring members of The Altered Hours, ex-Saint Yorda and many other projects and solo outlets, their debut gig at IndieCork festival 2015 won them the inaugural IndieCork Music award. Tonight’s show is their Dublin debut.

The Jollars: Rebel County drunk punks are on a mini-tour this weekend. Tonight sees them play Cork’s Fred Zeppelin’s, tomorrow night they’ll play Ballina’s Fesant Fest, and on Sunday, they’ll finish up in Belfast. Old-fashioned oi for them what wants it, with Lagansiders/ex-Runnin’ Riot men United Bottles co-headlining.

The Shaker Hymn: Having released new LP Do You Think You’re Clever?, the band’s attention now turns to the album’s third single, Waters of Sea Change. The video is streaming now and the band continues touring the country.

IMLÉ: Multi-genre Gaeilgeoirí have this week launched new single Síos an Bóthar, with a video shot and edited by the track’s lead vocalist, Fergal Moloney. Dealing with the issues of mental health and negative internal monologues.

Windings: New tunes from the long-running Limerick outfit, in a dark and foreboding frame of mind ahead of album number four, Be Honest and Fear Not. Stray Dogs is the leadoff single from the LP, while the other A-side, Helicopters, is a once-off collab with fellow Limrocker and skratch/noise hero Naive Ted. Gigs just announced nationwide in support.

Exclusive: Mary Byrne: The Irish Susan Boyle: Before She Was Famous!

3 thoughts on “You May Like This: Bank Holiday Special”