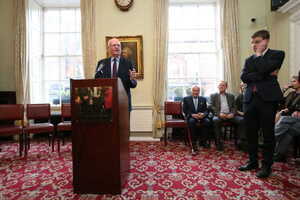 Politicians might publicly agree with Seanad reform yet their inaction shows that they want to keep the status quo.

Most people do not trust politicians or our political institutions of government like the Dáil and the Seanad.

Too many unfilfilled promises, a consistent failure to deal with the key issues affecting people, cronyism, corruption and a failure to respect ordinary people’s wishes and concerns have left people cynical and tired of politics.

This is a major problem for our democracy which is founded on the principle of ‘rule by the people and for the people’ – all the people and not just the elite, wealthy and insiders.

Take the Seanad, for example. The Seanad is the second most important institution in our democracy, next to the Dail. It is the upper house of the Oireachtas (the Irish legislature or houses of parliament).

It does not have anything like the powers of the Dáil but Senators are part of the important ‘watchdog’ Dail committees that investigate various issues and hold state and other authorities to account, like for example the recently formed housing and homeless committee.

The Seanad can also delay laws and propose amendments to laws.

Last week the election was held for 49 of the 60 senators. Understandably given the lack of ability of people to vote in it, it received little attention. It was unfortunate though that there was not more critical analysis by the media of this undemocratic and elitist process.

We had a referendum on the Seanad in 2013. Remember? And a majority of Irish people voted to retain it and not to abolish it. They gave a clear message that they wanted it reformed to be given more powers and for all citizens to have a vote rather than abolished.

Furthermore, an all party Oireachtas working group on Seanad Reform 2015 concluded that

They recommended opening it up to all citizens to vote.

So why has it not been reformed and why have all citizens not yet being given a vote in the Seanad Elections?

From my recent experience as a candidate in the Seanad NUI colleges election the only conclusion I can draw is that the current system suits those in power and the traditional establishment parties.

They might publicly agree with reform and opening it up to make it democratic for all citizens yet their inaction shows that they want to keep the status quo. Of course it suits them – a new Taoiseach can use the existing system to appoint almost a fifth of all new Senators.

Shamefully it has been used by some failed politicians who actually campaigned against the Seanad as a route to re-election.

Unfortunately I was unsuccessful in my bid this time for election to the Seanad on the NUI panel. After getting 837 first pref votes (11 out of 30 candidates) I was eliminated on the 21st count with a final tally of 1451 votes. Former PD and long time supporter of inequality – Michael McDowell got elected as did the right wing conservative Ronán Mullen.

That these two topped the poll says a lot about those who voted in the election – a bastion of conservative views.

So in the end only 10% of NUI graduates actually voted in the election.

Thankfully, the excellent progressive community activist Lynn Ruane got elected on the Trinity Panel while Alice Mary Higgins was elected on the NUI Panel. I know they will both be strong voices for social justice and equality in the Seanad.

While I was very disappointed not to get elected I am proud of how I used my campaign to raise some of the key social crises that are affecting people in this country – like the scandal that 1,900 children are homeless, rents are unaffordable for many, 138000 children are in poverty, almost 60% of lone parents and their children suffer deprivation.

I decided to run late in the game and I also had to balance running the campaign with looking after a very young family and a full time job. It’s clear to me that if you are going to successfully run for election then you need to have a lot more resources, people and time for your campaign.

Either way I will continue in whatever ways I can to raise these issues and develop solutions that can make Ireland the best country in the world in which to be a child, to have a family, to grow old in – the best country in which every person is valued equally and can live with dignity and flourish to their best potential.

Its a long road ahead but I know that a majority of us in this country want to bring about a Republic of Social Justice and Equality.

Finally, we clearly do not have a true democracy when the right to vote for representatives in our second house of parliament is restricted to a tiny proportion of the population. Another issue is citizen’s initiated referendums – which I will come back to again.

Providing for free and fair elections to the Seanad where the franchise (entitlement to vote) is extended to all Irish citizens over 18 including Irish citizens in Northern Ireland and to holders of Irish passports living overseas
A majority of Seanad seats to be elected by popular vote on the principle of one person one vote
Strengthen the powers of the Seanad to scrutinise, amend, and initiate legislation
Introduce citizen-initiated referendums

And we can judge the commitment to starting this process of real reform and democracy in how Enda Kenny uses his power (assuming he is re-elected as Taoiseach) in the next few weeks to appoint 11 new Senators.

Will he use it for patronage and reward for loyal Fine Gael servants or will he take a bold step and appoint diverse voices who represent the most marginalised in our society?

I won’t be holding my breath on this one….

45 thoughts on “Where Is Our Democracy?”