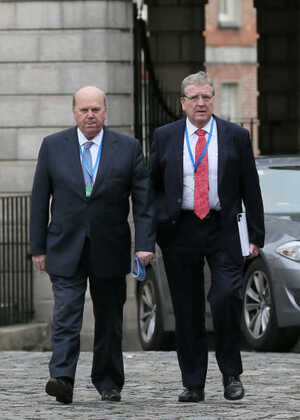 Dr Gavin Jennings: “I gather unanimous backing at your own parliamentary party meeting for this document last night?”

Breen: “Well it’s not a question about conceding, it’s a question of a compromise. I mean, look, we faced a situation, after the general election, where we didn’t get the majority we needed to return the outgoing government, we returned as the largest party in the Dáil, I think there was an onus on Fine Gael to try and form a Government, we’ve been trying to do this over the last 67 days, talking to Independents, talking to Fianna Fáil, and eventually coming up with this document which reflects the broad policy principles, agreed by Fianna Fáil and Fine Gael negotiators and today of course we’re making progress with the Independents and hopefully before the end of the week we may be able to put a Government into place.”

Dr Jennings: “Now it’s in writing, it’s been published, we can see it, it contains a lot more policy than I think many of us expected, albeit, in some places, it’s a little vague. Can I just read out some sections just to see…”

Dr Jennings: “These might have been some of the questions that might have been raised by you and other members last night. You spent a long time talking about water with Fianna Fáil and we know about the commission that’s going to be set up and the suspension of water charges. ‘We affirm that those who’ve paid their water charges to date will be treated no less favourably than those who have not’ – what does that mean?”

Breen: “Well it means that anybody that has paid their bills will have paid their bills in full obviously. It’ll take six weeks to set up this commission and to suspend the water charges. So everybody will have to pay their water bills for the first half of this year. And obviously the law has to be upheld in relation to those people, we want to treat people equally here, to that haven’t paid their water bills and that’s the situation at the moment. Water bills are live right up to the time when legislation is put into place, probably in six to seven days time which will probably bring the water bills right up to the end of June.”

Dr Jennings: “So those who haven’t paid will be pursued?”

Breen: “Those that haven’t paid will be pursued, the law will have to be upheld in relation to this.”

Dr Jennings: “How will they be pursued?”

Breen: “That’s a matter for the Irish Water, obviously they’re pursuing people at the moment. Over 65% of the people that paid their water bills – that water, any arrears that are in place will be there for those people to pay at some stage.”

Breen: “If you don’t pay then that’s a matter for Irish Water to decide how to deal with the situation.”

Dr Jennings: “The other questions that arise, and there’s a few of them, under the heading ‘Securing affordable homes and tackling homelessness’. You promise to provide greater protection for mortgage holders – how?”

Breen: “I think that’s all, this is, first of all, I have to say this policy is a statement of broad policy principles..”

Breen: “It’s a bit broad. That’s all you’d expect it to be Gavin, really, at this stage. It’s not going to be a programme for Government. Obviously a programme for Government would be much more comprehensive. You have to understand this is a minority-Government and that Fianna Fáil will be in opposition and we’re going to be in Government, so the document that was agreed was always going to be very broad, a broad policy principles of both parties in agreement. On the issues that were raised at the doorsteps during the election campaign, you mentioned mortgage relief and that’s something that’s extremely important – that’s now been extended now right up to, it was supposed to end in December 2017 – that’s going to be extended as well. Rent supplement is going to be increased as well – up to 15% as well. So, you know, what we have done in this document is that we haven’t compromised in the core Fine Gael policy, I think that’s important as well.”

Dr Jennings: “Did you compromise at all?”

Breen: “A lot of the Fine Gael manifesto is included in this here, of course you have to compromise on certain issues…”

Breen: “Well we compromised in relation to Irish Water. First, you know, Fianna Fáil did as well. We wanted charges to be brought in immediately. That didn’t happen because we didn’t get the numbers in the Dáil… and Irish Water is still there. I think that’s the important thing to point out.”

Dr Jennings: “Have you compromised on USC?”

Breen: “No, well, we haven’t compromised in USC, what we have, we have compromised a certain amount in USC...”

Dr Jennings: “You said you wanted to abolish…”

Dr Jennings: “Are you going to abolish it?”

Dr Jennings: “Are you going to abolish it? Have you had to compromise?”

Dr Jennings: “‘We will take all necessary action to tackle high variable interest rates’ – what does that mean?”

Breen: “Well, exactly, I mean obviously what’s important here, in relation for people, is to ensure that people are kept in their homes, that they can pay an affordable mortgage, I think that’s extremely important as well. And you know when we put the programme for Government together, obviously it’ll be much more comprehensive in relation to…”

Dr Jennings: “What does ‘take all necessary action’ mean?”

Dr Jennings: “Yes, I know that but just, the phrase is put in here after weeks of talks, what does it mean – ‘take all necessary action’. Is it just thrown in there just to make us all feel good or does it mean something?”

Dr Jennings: “When will there be a Government?”

Breen: “I would hope there would be a Government in place before the end of the week, if not early next week, but I would hope that it would happen sooner rather than later. I think a lot of progress has been made with the Independents over the last couple of days. There’s going to be a lot of work done today with the Independents as well. There are some outstanding issues to be dealt with but, you know, most concerns have been dealt with the [Independent] Alliance and with the rural group.”

Dr Jennings: “What are the big issues left to be dealt with?”

Breen: “Well, obviously, the individual deputies, Independent deputies will have their own issues, I’m not privy to those issues at the moment because obviously those talks are taking place within the confines of Leinster House with our negotiators but I’m happy to report that a lot of progress has been made and I’m confident that we will be in a situation in the coming days to form a minority government and there’s going to be a challenge, there’s no doubt about that out there. The reality here is for all deputies, 158 deputies is that the careful management of the economy and the public finances will remain a priority for them, this minority government and there’s a challenge for all of us in this, including the Opposition.”

‘I’d Urge The Residents To Search Deep Inside Their Conscience’

25 thoughts on “Requiem For A Breen”