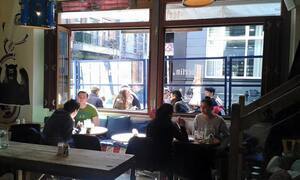 “We’re quite devastated really,” says staff member Poppy Copeland. “We spent a whole year trying to develop a nice community coffee shop where a lot of people have met and developed relationships,” she says. “It’s a real nice hub for everyone to meet and just to feel like that space is going to close soon is just sad for everyone involved.”

Café manager Stephen McCusker says he agrees. It’s been a year or so since he and Copeland started to work together, and, it looks to them as if they’ve created something in that time.

As a space, Berlin D2 evolves throughout the day: mornings and afternoons, those who work in the area nip in for coffee and lunch. As evening approaches, one or more DJs occupy the decks for an ambient, boozier, feel.

Berlin D2 rents its space from the Powerscourt Centre, and after some disagreements with the landlord, McCusker and his team decided to call it a day.

“We could get into, for want of a better term, a shit-fight over the place,” he says. “But I think it’s better to come out with your head held high and you go, ‘We did a great thing but due to unforeseen circumstances it has to finish.’”

It’s unclear what might take their place. Copeland and McCusker reckon it’ll be one of the big chains. They note the empty retail spaces on Coppinger Row which adjoin the café.

A spokesperson for the Powerscourt Centre did not respond to phone calls asking to talk to somebody about the space, and what might replace Berlin D2.

Copeland notes the recently opened Starbucks on Drury Street and feels the area is no longer the stronghold of the smaller, independent coffee shop.

69 thoughts on “First They Take Berlin”