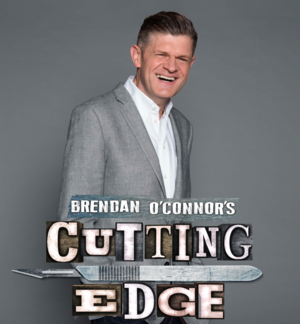 Each week, Brendan O’Connor will be joined by three regular panelists to cut into the week’s news from Ireland and around the world, in the style of a darkly comedic post mortem.

This g show will feature the big news stories, alongside the colourful nuggets that may have escaped the public’s attention.

As with all the best discussions there will be some good laughs and some fierce disagreements as the winners and losers of the week come under the penetrating gaze of the panel. This show is serious fun.

As for tickets, Alan adds:

We’re offering people the chance to witness the discussions first hand. For a chance to be part of the live audience and see the action at its closest, send us an email at tickets@mindthegapfilms.com. Tickets are free. Audience members must be 18 or over.

“I Was Literally Bought”

We Get What We Deserve

79 thoughts on “Watch Them Cut The Edge”