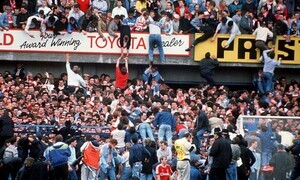 Last month, an inquest jury ruled that the 96 football fans who died in the 1989 Hillsborough disaster were unlawfully killed.

It also found that match commander Chief Supt David Duckenfield was “responsible for manslaughter by gross negligence” due to a breach of his duty of care.

Like all Liverpool FC fans of my vintage, I remember the day well. The sun shone all day and there was a real summery feeling in the air as we sat around the television to watch one of the most eagerly-awaited games of the year. I would have been envious of those who were “lucky” enough to have tickets for the big game.

I had been at a number of Liverpool games in London earlier that season, including one at Arsenal where overcrowding prevented me from seeing most of the first half at Highbury. Fans were herded like cattle onto the terraces in those days. That’s just the way it was.

It was terrible to sit in front of the TV and watch the scenes unfold ‘live’ as fans were squashed to death in front of a global audience of millions. It only took minutes to realise that something was seriously wrong.

Looking back, it was unbelievable that the match kicked-off at 3pm when so many people were crowded into the pens behind the goals. Had [Liverpool striker] Peter Beardsley scored a goal – he hit the bar just a few minutes into the game as fans were still streaming down the tunnel behind the goals – the death toll might have been even worse.

If it was distressing to watch the scenes unfold back at my parents’ home in Galway, the anguish of relatives watching on Merseyside – knowing their family members were on the Leppings Lane end – must have been unthinkable.

There were no mobile phones in those days, so many of them just jumped into their cars and hit for Sheffield as the news filtered through that so many fans had died.

Hard to imagine now the anguish they experienced when they were escorted into a gym, which had been converted into a makeshift mortuary, only to be quizzed about the drinking habits of their loved-ones even as they were in the process of identifying the dead.

Phil Scraton outlined the appalling treatment of the families in his comprehensive book, ‘Hillsborough’, a distressing but riveting read which was first published as far back as 1999. In it, the families and friends of the victims outlined how disgustingly there were treated even as they searched for their missing loved-ones.

If the pain began with the live TV coverage, it was compounded in the first 24 hours by the heartless reaction from the police – already intent on a cover-up – in response to the distress of the families.

Many of the police officers in Sheffield that weekend looked upon the victims as though they were criminals when their only ‘crime’ was to follow a football team and to be ushered, like cattle, into overcrowded pens.

Within days, the South Yorkshire Police were changing their statements, more intent on covering up the truth of what really happened than finding out why such a terrible tragedy occurred.

Officers were told not to apportion any blame to their superiors and any who did had their statements redacted or changed. If David Duckenfield, in charge of the police operation on the day, had not ordered a gate to be opened outside the terrace, it is believed far fewer fans would have died.

It was a heartbreaking week for everyone on Merseyside. There were so many funerals, so many injuries, and so many survivors who found it hard to live with the guilt of coming out of Hillsborough alive.

For many people, football died a death that day. After all, how could so many suffer so much merely for following a football team? The game just didn’t seem to matter any more.

And, in the middle of it all, the shock of seeing that headline, that devastating front page, in The Sun. It resulted in a boycott of Rupert Murdoch’s tabloid right across Merseyside which has continued to this day.

The police, the Tories, and The Sun looked on the victims as expendable, people who could be lied about in court, at inquests, or in print, because they were mainly from Merseyside and mostly working-class. They didn’t have a voice.

The subsequent report by Lord Justice Peter Taylor changed the face of football forever, with the removal of terraces and the introduction of the all-seater stadiums which are taken for granted in the English Premier League today.

Over a year after the tragedy, the Director of Public Prosecutions decided there was insufficient evidence to press charges against the police, or any other individual or group, as a result of the tragedy.

An inquest returned a verdict of “accidental death” in March 1991 and the authorities expected that to be the end of the tragedy.

They wanted the families to simply fade away or disappear. Two years later, the 96th and final victim, Tony Bland (22), passed away after he was taken off a life support machine.

A change in Government saw Home Secretary Jack Straw ordering for evidence to be re-examined eight years after the tragedy, but he ruled out a manslaughter charge the following year.

And the taunts continued. Imagine the grief of the families when they heard some rival fans chant “Always the victims, It’s Never Your Fault” or, worse, “Murderers” when Liverpool travelled to play clubs such as Manchester United or Chelsea.

They were still being tarred with the slurs depicted in The Sun back in 1989.

To their credit, the families never gave up. They opened a little shop under the shadow of Liverpool’s Anfield Stadium and mingled with the fans, reminding them of the tragedy, on match days.

And so, gradually, the calls for justice grew. By the 20th anniversary of the tragedy, they had reached a crescendo.

I remember one FA Cup game against Arsenal in January 2007, when three-quarters of the ground chanted “Justice for the 96” throughout the first six minutes of a game which was shown live on BBC TV.

Liverpool lost that night, but anyone present in the ground was moved to tears by the conviction of the chants and the huge mosaic, The Truth, which adorned the Kop at the start of the game. Somehow the result of the game did not seem to matter.

The fans mimicked the hurtful headline from The Sun and turned it into a rallying cry.

And, somehow, despite the legal barriers they faced, the families decided they were no longer going to play the role of victims.

At the Hillsborough memorial service at Anfield in 2009, chants of “Justice for the 96” drowned out the politicians and Andy Burnham MP, a fan of city rivals Everton, became a champion of the Hillsborough Justice Campaign.

Everton, although footballing rivals, and Burnham were hugely supportive of the campaign and Burnham spoke brilliantly about the grave injustice inflicted on the families of the 96 following the verdict of the new Inquests last week.

It was the 20th anniversary memorial which prompted the setting up the Hillsborough Independent Panel and, two years later, British lawmakers agreed to hand over all Government papers relating to the tragedy. Quite simply, the families refused to give up.

Fans at the game were convinced that lives could have been saved if the authorities had reacted in an appropriate manner but, shockingly, official confirmation of that fact did not emerge until 2012, 23 years after the tragedy.

By then, some survivors had committed suicide and some key family members, including Anne Williams, did not live to see last week’s verdict of unlawful killing. Anne lost her son, Kevin, at Hillsborough.

There was good news in 2012 when the Hillsborough Independent Panel found that the South Yorkshire Police orchestrated a cover-up, falsified witness statements, and blamed innocent supporters who, if anything, were the heroes of a terrible afternoon.

Thanks to the dogged determination of the families, the High Court quashed the original coroner’s verdicts of accidental death and so began the new inquests, the longest in British history, in March 2014.

For two years, the family members turned up daily to hear the evidence at Warrington, including that of the police officers who caused so much pain in the immediate aftermath of the tragedy.

Not in their wildest dreams could they imagine that the jury would return a verdict of unlawful killing – vindication, at last, 27 years on from a tragedy which should never have occurred.

If the Hillsborough disaster changed football, the dogged determination of these ordinary heroes in the families of the 96 changed British legal history.

It wasn’t their fault.

It took 27 years for the wide world to learn something which the whole of Merseyside had known from the start.

Justice, at last, for the 96 . . . and for the families who refused to be bullied or silenced by a rotten police force, a hostile Tory Government, or the vicious lies published by a sensationalist tabloid. None of whom ever seemed to consider, or care about, the hurt they caused.

An amazing “victory” for ordinary people who stood together and were not afraid to take on the most powerful in British society.

Justice at last for the 96 (Ciaran Tierney)

Hillsborough And The Truth

17 thoughts on “A Liverpool Fan Writes”