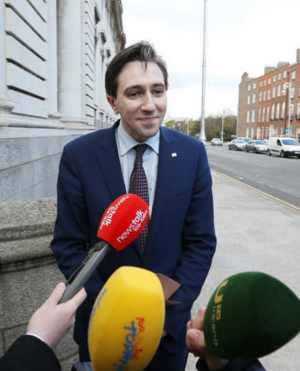 “Voltaire once commented that “the most important thing in life is to speak your mind”. That’s exactly what I did last week. At a private meeting amongst colleagues, I raised concerns about legislating for abortion in Ireland, adding that should such a scenario arise, I would have grave difficulty supporting it. The next day I read about my comments in the media.

… I have a strongly held view on this and I need to stand by that belief. I will not throw insults at others of opposing views, in the way others threw insults at me last week. In a liberal, open society which so many people talk of, guaranteeing people their right to hold a view, to make that view known and to stand by their principles is not an optional extra. Liberalism, tolerance and openness require each of us to respect the rights of others to differ with you, to have thoughts and beliefs with which you may not concur.”

Simon Harris: It’s not bigoted to have a view on abortion (Sunday Independent, July 22, 2012)

Fine Gael TD Simon Harris also sent an anxious e-mail in the final week of the campaign assuring PLC [Pro Life Campaign] that: “I am happy and proud to assure you I am pro-life.”

Mr Harris added the nervous plea of: “Please be assured of my support. I need No1 votes on Friday so I can be in a position to support these positions in Dail Eireann.”

Fine Gael junior minister Simon Harris has said he wants the right to an abortion extended to women whose babies have fatal foetal abnormalities, describing their situation as “appalling”.

In an interview with The Sunday Times, the minister of state in the Department of Finance said he believed a referendum on the eighth amendment, which gives an equal right to life to the mother and unborn, will probably be required to widen the grounds for abortion to these cases.

104 thoughts on “Abortion And What Simon Said”