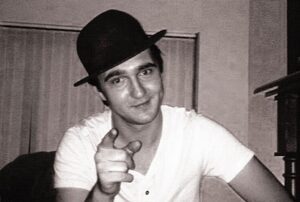 Trevor Murtagh was the only child of Seamus and Carole Murtagh of Dundalk, Co Louth.

A busy political activist and writer, Trevor graduated from Trinity College Dublin with a masters degree in Psychoanalytical Studies.

He took his own life the day after his 29th birthday.

In Village magazine, where Trevor interned, Trevor’s cousin Jon-Paul Faulkner documents the family’s struggle to get him help in a system that made things worse.

I was living up in Dublin. Trevor was at home in Louth. We were close cousins who had lived next door to each other our whole lives – he was my brother really, to be honest. Trevor, apart from my Mum, was the closest person in my life, he was my family.

Whenever I felt down, I’d be really quiet; Trevor was the opposite: he could always talk ‘til the cows came home and was really outgoing. This made me think that Trevor was happy.

He had changed a little since he had had a bout of depression in 2011, just after he finished his Master’s in Psychology. His family and friends knew about it. He was still Trevor, positive and outgoing, but when we’d go socialising he would sometimes be more hyperactive than usual, talking non-stop, but still so, so much energy, so outgoing, clever, and apparently happy.

I got a phone call from his parents to say Trevor had been admitted to hospital. His friends had found a suicide note crumpled up in a basket and he had been hospitalised. I couldn’t believe it. It came as a complete shock.

I had seen him the previous weekend, and he seemed ok, though not his usual cheerful self, certainly a bit quieter than usual. Trevor was admitted to hospital on 20 June 2014 and was discharged nine weeks later on 22 August.

It took me a long time to write this, mainly because we wanted to wait until Trevor’s inquest before telling our story, and that didn’t happen until 3 November 2015, but also because, going through in detail what happened to Trevor during his stay in hospital is so, so painful for me: I don’t want to remember him that way.

I think of Trevor from the moment I wake up to when I lie in bed at night, but I try to remember the real Trevor, the happy one – of those memories I have so many. The perverse images of Trevor, once so full of life, lying in a coffin, these memories come to me and I struggle to push them away and think of happier times.

Trevor’s family, and particularly his Mum, Carole, struggled in vain to get help for her only child. We thought we were lucky that Trevor was actually admitted to a psychiatric hospital, but unfortunately we were not lucky with a minority of his healthcare professionals, including his head consultant. His mental health actually deteriorated during his stay in hospital.

When I came in to the hospital that evening of 20 June it broke my heart. It was surreal; Trevor wasn’t Trevor, he was manic, he was so distressed, he kept rubbing his fist against the side of his head, “there’s nothing, there’s nothing in here”, he was saying. “I’m nothing”. It didn’t make sense, Trevor thought he had nothing in his head, nothing to say, the guy could talk for two hours straight about most topics, he was an intelligent guy! He was also saying he had no friends, yet Trevor had such a huge number of friends, and they were ‘real’ friends, they all really loved him, and they were from all walks of life.

But I was wrong, and it didn’t take long to realise it.

(continued at link below)

Trevor Was A Scholar And Environmental Campaigner (Obituary, Independent.ie)

5 thoughts on “A Man In Crisis”