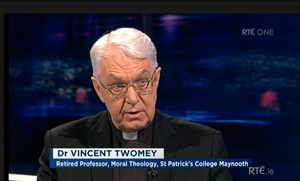 Contrary to the claims made by Dylan Tighe (May 7th), symphysiotomy is not, and never has been, a procedure promoted by the Catholic Church.

It was an exceptionally rare medical procedure (accounting for 0.05 deliveries out of every hundred) used until the danger of infection caused by Caesarean section was, thanks to the development of antibiotics, removed, except at Our Lady’s of Lourdes Hospital, Drogheda, where it was used until the mid-1980s.

While it is true that in 1948 Dr Alex Spain, a master of the National Maternity Hospital, did reference what he called the Catholic “rule” on contraception and sterilisation as one of several justifications for resorting to symphysiotomy in a tiny minority of births, it is simply not true to say that this procedure was used mainly for reasons that had to do with Catholic teaching, much less that the procedure was promoted by the Catholic Church or by Catholic moral theologians.

In the moral theology textbooks I consulted, old or recent, it was not even mentioned.

The ethos of religious-run hospitals in Ireland is something to be proud of. That ethos is often reduced to Catholic ethics with regard to what are now called reproductive issues. But Catholic ethos is much more than matters relating to bioethics.

It is founded on a life-long commitment to God by serving those in need, a practice that goes back to the origins of Christianity as inspired by Jesus Christ (Matthew 25:31-46).

The most evident manifestation of a true Catholic ethos and innovation is the hospice movement, founded in Harold’s Cross, Dublin, in 1879 by the Irish Religious Sisters of Charity and then spread throughout the world.

Pioneers in the care of the sick and suffering in Africa were, and are, the Medical Missionaries of Mary, who founded and run Our Lady of Lourdes Hospital in Drogheda. Little recognition is given to their selfless dedication to sick at home and abroad.

Thousands of Irish religious, mostly but not exclusively female, have given their entire lives to care for the sick and suffering. Their “influence . . . over the care of patients” does not deserve to be described, quoting Mr Tighe, as “vile and scandalous”.

Dare I remind Mr Tighe – and others who are allowed to rant on about “religious-run”, “taxpayer-funded hospitals” – that Irish Catholics are also taxpayers?