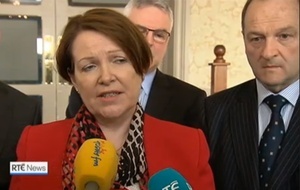 If the sergeant [Maurice McCabe] had been made wary by selective media leaks in advance of its publication, McCabe is also likely to have noted photographs of O’Sullivan attending the annual conference of the Association of Garda Superintendents on April 20 – because standing beside her was Noel Cunningham, the superintendent who, along with a sergeant, met McCabe in 2008.

Last May, the commission was told that a written record of that meeting would provide evidence that McCabe admitted acting on a grudge when he made allegations against senior officers.

But when McCabe produced a secretly taped recording of the meeting, O’Higgins accepted he did not, as alleged by the commissioner’s side, confess he was motivated by malice in pursuing complaints.

…Cunningham was represented at the commission by the same team of lawyers as O’Sullivan.

Some of McCabe’s allegations were against him. The report dismissed those allegations and stated they had caused Cunningham “worry and stress”.

“I have consistently and without exception, within An Garda Siochana and in public, stated clearly that dissent is not disloyalty, that we must listen to our people at every level with respect and with trust, and that we stand to gain, rather than lose, when members bring to our attention practices they believe to be unacceptable.”

…Her assurances failed to convince everyone, including five gardai who have turned whistleblowers. They include Keith Harrison, based in Donegal, and Nick Keogh, based in Athlone, who have made complaints about alleged misconduct. Both are currently on sick leave.

….In a recent email to a friend, Harrison wrote: “I’m seen as a traitor and a troublemaker. Nothing has changed and it won’t change. Maybe I would have been better off if I heard no evil and saw no evil. Many of my colleagues don’t speak out because of the fear of what might happen.”

6 thoughts on “Shoulder To Shoulder”