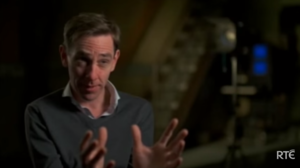 Wogan’s death in January this year came as a shock to his millions of fans. The legendary broadcaster, who succumbed to cancer at the age of 77, had kept his illness private. When he was forced to pull out of presenting duties on Children in Need and his BBC Radio 2 programme, the reason given was a bad back.

In Wogan: A Legacy, Late Late Show host Ryan Tubridy, who often covered for Wogan on his BBC Radio 2 programme including when Wogan became ill earlier this year, details his final contact with the Limerick man.

Why Does This Photo Make Us A Little Sad?

‘Some Guy In A Bedsit Watching Star Trek’

8 thoughts on “Staying In Tonight?”