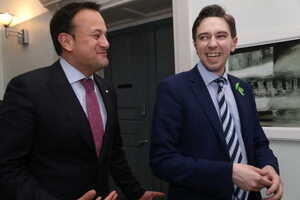 The government has been moving fast to reform our healthcare system.

But it’s doing it in the wrong direction.

We start today’s column with two simple, yet revealing, questions.

Question 1: What is the most important issue for Irish people?

Question 2: What is the most misrepresented issue in public discourse?

There is for sure a lot of media reporting on healthcare and much attention paid to it within government. However, so much of it is pure sensationalism that explains nothing about what’s really going on.

We hear scare stories of bugs and superbugs in hospitals, of people being parked on trolleys, of people dying because a doctor didn’t spot a fatal disease on time, of hospital managers being incompetent, of the HSE being a bureaucratic dinosaur, of hospital building plans being suspended for years, of potential strikes by nurses or other health professionals, along with so many other tabloid-type high-impact stories.

Yet we learn nothing about what the real problems are and how to fix them.

Another strand of reporting claims that “nothing gets done” in the HSE, or that “nobody in government has the energy to reform healthcare”. But that’s complete rubbish too.

The truth is this: the government has been moving rather fast to reform our healthcare system. But it’s doing it in the wrong direction entirely, namely, it’s going towards privatisation.

That’s been very clear since James Reilly became Health Minister, and the same plans have been pursued under Leo Varadkar and Simon Harris.

But in healthcare, the facts are very clear and the solutions very obvious and easy to understand. The problem is that almost nobody ever talks about them.

We have progressive activist groups on housing, finance, homelessness, migrants’ rights, education, abortion, sex work, anti-racism… but as far as I’m aware, there is no campaign for a public healthcare system funded by general taxation, which is the best system because it’s (1) cheaper, (2) more egalitarian, and (3) better for health.

Understanding these three points allows anybody to win any debate about healthcare against those who claim that a privatised, market-based, for-profit system is better.

The United States has by far the most privatised system in the world. Accordingly, the two graphs show that it is twice as expensive as other developed countries’ systems, which are largely public. 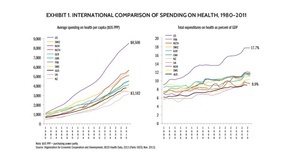 Why are for-profit systems so expensive? One reason is that they need to generate profits and pay bonuses for executives, taking funds away from care. Another is bureaucratic waste.

Privatised systems involve a lot of paperwork to assess insurance claims, to code and price hospital services, to record all transactions taking place in the market, and so on. In Ireland, there are now over 400 insurance plans available.

This makes it extremely complicated to manage and involves armies of private bureaucrats to process.

The US has the highest administration expenditures among developed countries, accounting for 25% of total hospital spending, compared to 12% in Canada and 16% in England (which have public systems). The US would save $150 billion a year if it reduced its administrative expenses to Canada’s level.

That’s easy. Access to public systems doesn’t depend on how well off you are—everybody has the same access. You are treated according to your health needs, not according to your wallet, and this is how it should be.

The fact that less well off people have a hard time accessing healthcare results in poorer health outcomes. But there’s a second aspect as well. For-profit hospitals tend to provide care of lesser quality and mortality rates are higher in them because they dedicate fewer resources to doctors and nurses. There’s no surprise here: they want to cut their costs to boost their profits, so they cut in the services they give you.

This is why the editor of The Lancet, the world’s leading medical journal, blasted market-based reforms in Britain, putting it bluntly: “People will die because of the Government’s decision to focus on [market] competition rather than quality in health care”.

Recall also that the US has some of the developed world’s worst health outcomes, even if it spends much more money than other countries on health.

In sum, the government’s strategy is this. First, cut funding to the public healthcare system, which will then become chaotic and incapable of delivering good healthcare.

The media will then join in and publish all sorts of horror stories about our hospitals. A mood will set in: “public healthcare = bad”.

This is what has been happening. Public spending on health has been reduced by 12% since 2009.

We have the scare stories all over the place in the media with trolleys and bad ambulance response time, etc.

Then we have the government’s plans to push further the system towards privatisation, including creating hospital groups, a purchaser-provider split, activity-based funding, and greater “autonomy” for hospitals. I talk about this at greater length in chapter 7 of my latest book.

“Where hospitals consistently under perform in terms of clinical outcomes, patient experience and financial management, it should be open to the provider to transfer management of the hospital for a period of time to a private provider”.

The Irish Medical Organisation (IMO), which represents doctors in Ireland, strongly criticised Varadkar and stated that his idea that profit-minded private businesses could take over public hospitals was “grossly insensitive and ill conceived”—it “will downgrade public service and pave the way for privatisation of our essential health services”.

The IMO recalled that for-profit medicine “has been a disaster in other countries”, most evidently in the US.

Therefore, we need to start taking action to reclaim and improve our public healthcare system. It will be better for health and more efficient financially.

Terror On A Wing And A Prayer

60 thoughts on “Your Health In Their Hands”