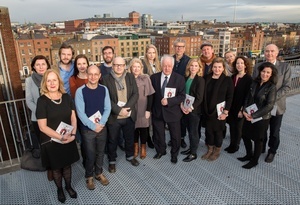 Ireland is bottom of the European league for Investment in Culture and the Arts.

It’s us. We sing, we dance, we make music, we count some of the greatest literary giants among our current and past heritage and we have stage & screen actors who are the envy of the world. That’s before we talk about directors, producers, casts, crews, and a whole plethora of people involved in creating and fostering the arts in this country.

Each one equally important & the need for us to support and nourish these talents is surely a no-brainer. You would think wouldn’t you? You’d be wrong.

A Government with just 59 seats now has 33 ministerial posts. But try as you might, you cannot find a Minister with responsibility for Arts among that 33.

From Government ranks there are shouts about the millions that have been pumped into the Arts recently. What they’re not clarifying is that the vast majority of that funding was specifically for State commemoration events related to the 1916 anniversary. It was not sustainable targeted investment in the arts.

We are bottom of the European League for Government Investment in Culture and the Arts. According to the National Campaign for the Arts , data from the Council of Europe shows that in 2012 Ireland spent just 0.11% of GDP on the Arts and Culture, compared to a European average of 0.6% of GDP.

The Arts directly employ approximately 21,000 people and that doesn’t count the many volunteers or unemployed artists across the country striving away at their passion and trying to bring joy into people’s lives through a kaleidoscope of creative endeavours.

During the recent 1916 commemorations the outpouring of pride and sheer awe that followed the hour long celebration of our culture on RTÉ, ‘Centenary’, was indicative of how important our creative side is to us.

Twitter went into overdrive and every demographic roundly commended the project as stunning. It was followed closely by Laochra in Croke park. A similar spectacle that showcased the strength of our music, dance, and theatrical efforts.

It’s just such a pity that the State’s interest was fleeting and only preoccupied with this specific window of time. Imagine if the same effort and funding was directed towards the Arts in a consistent and sustainable fashion?

Imagine the talent that would be nurtured and fostered and how the strength of our artistic output could continue to wow both the domestic and the international crowds.

The Campaign for the Arts estimates that for every €1 invested by the Arts Council, more than €0.70 returns directly to the exchequer in taxes.

For a net cost of €0.30, Arts Council investment generates €2.50 in turnover, more than an 8-fold return on investment. Any decent financial brain would see the merits in those returns.

But the economics of this, while hugely important, should not be the sole driving factor.

We are talking about the very fabric of our society-the je n’sais quoi that makes diaspora around the globe feel connected to home, makes third and fourth generation emigrants identify with Ireland and makes us here at home proud of our immense talents and our cultural identity.

Those artists who create this magic are not an infinite resource, they are most assuredly finite and if Government policy continues to disrespect and undermine the arts then we will watch helplessly as our vibrant artistic community withers away and our reputation for world class artistry goes with it.

153 thoughts on “The Arts of Nowhere”