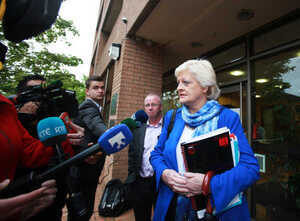 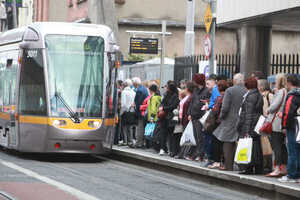 From top: Patricia King, general secretary of the Irish Congress of Trade Unions this morning at the Labour Court; Luas commuters; Jimmy Dignam

As Siptu and Transdev meet at the Labour Court to resolve the Luas driver’s dispute a Workers’ Party activist sets out the case against Transdev.

The LUAS strike is not about how big the pie is – it’s about agreeing the fairest way of sharing the spoils.

And Transdev’s behaviour shows that privatising our services means increasing spoils for corporations – at the expense of workers and the state.

Over the past twelve years, the Luas service has been a stunning success – not only for the commuters it serves, but also for its operator, multinational transport giant Transdev.

In 2013, the company’s EBITDA (Earnings before Interest, Taxes, Depreciation, and Amortization – a useful proxy for company profitability) were €1.54 million, while in 2014 they were €1.24 million.

In 2013 it paid a dividend of €1.68 million to its shareholders while its parent companies, Veolia and Caisse des Dépôts et Consignations, generated profits of €246 million and €1.8 billion, respectively, in 2014.

In addition, Irish profits are likely to rise significantly when the Red and Green lines are joined in 2017. And given that Transdev is reportedly considering bidding for bus routes when they are put out to tender later this year, they obviously still view Ireland as a lucrative transport market.

Transdev have succesfully manipulated the public mind into seeing them as a struggling company, burdened by unreasonable pay claims. But what we can be sure of is that the shareholders are getting their fair share – why not the workers?

So the current dispute is not about workers bringing an ailing company to its knees. Rather, it is about workers seeking to negotiate with a profitable company for an improvement in their terms and conditions. As one worker put it last week when interviewed by The Journal: “We’re looking for a fair slice of the company we’ve helped build”.

After years of listening to voices in the establishment decrying the plight of the private sector worker in comparison to their ‘overpaid’ public-sector counterpart, one might have expected the media to swing in behind the Luas workers in their struggle for better conditions.

Yet, the artificial, media-constructed divide between public and private sector workers has taken a 180 degree turn over the last number of months.

From the vilification of public sector workers at the height of the economic crisis we must now listen to denunciations of greedy private sector tram drivers holding the population to ransom. Nurses, doctors and teachers, once denounced, are now lauded in comparison – one suspects there is a more general anti-worker agenda at play here.

When I joined them on the picket line last month I was struck by the conviction of the Luas workers’ beliefs.

They recounted the intense concentration required while driving through Smithfield at midnight, as drunk young people stumbled out onto the tracks – and how a seemingly small increase in unbroken driving time, as proposed by Transdev, would in fact go against best practice health and safety advice.

They also spoke passionately about how unfair it is that a worker is paid less in the private sector than the public sector for doing fundamentally the same work.

Luas Drivers wages are ‘significantly lower than those of Dart, Suburban or Irish Rail Mainline drivers’.

How is it that, for those at the top, we hear enormous public salaries justified by a need to compete with the private sector, but for the ordinary workers, it’s considered acceptable to earn less in a private company?

Meanwhile, LUAS workers accused of greed and self-interest rejected outright proposals from Transdev that new entrants would earn less in real terms than colleague who started five years ago. Its an admirable demonstration of solidarity with young, precarious workers.

The contrast between this solidarity, and the profit-hunger of Transdev is worth dwelling on.

Why is it we believe that a massive, profitable multinational company has the right to increase its profits indefinitely, while workers’ demands for a commensurate increase in wages is regarded as greed?

Transdev’s consistent profitability over successive years shows that the LUAS is one of the most profitable elements of our transport system.

But currently, as a state we lease the provision of this profitable service out to a private company to benefit from. It will always generate more revenue than an isolated bus route in rural west Cork – I imagine Transdev won’t be leasing that service provision from the state any time soon.

Jimmy Dignam is a member of UNITE’s Youth Committee and a Workers’ Party representative for Dublin Northwest Follow him on Twitter: @JimmyDignamWP

Meanwhile, On The Red Line 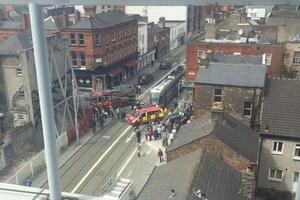 218 thoughts on “Everything On The Line”