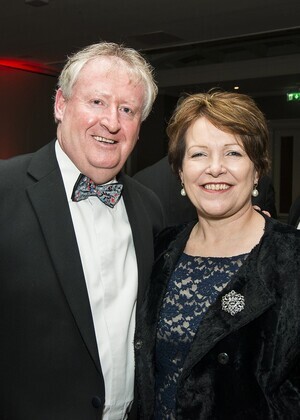 Detective Superintendent Jim McGowan, the husband of Garda Commissioner Nóirín O’Sullivan, heads the team of half a dozen officers tasked with closely monitoring the water protesters and gathering intelligence on their whereabouts.

The Mail understands that the investigating officers also closely monitor social media and track the organising of the water protests and its leaders.
Dossiers on many of the ‘ringleaders’ of the protests have been compiled…

The promotion of the Garda Commissioner’s husband comes just weeks before responsibility for such appointments switches to the new independent Policing Authority.

Mr McGowan has also worked at Ballymun Garda Station in the DMR North Central division, and was previously the Superintendent in Trim, Co Meath. His current role is coordinating and tasking regional policing operations in the DMR division.

Speaking to the Herald, Mr McGowan said he was pleased with the promotion and that he was able to offer his service to the force at the rank of Chief Superintendent.

Garda Commissioner’s husband is promoted to chief superintendent (The Herald)

Call for allegations to be brought to GSOC (RTÉ)

35 thoughts on “A Couple Of Swells”