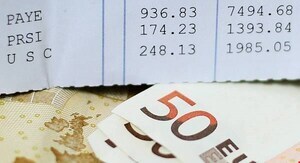 In a previous blog I discussed the issue of who is benefiting from income increases, using national accounts and the Survey on Income and Living Conditions.

Here’s another look at the issue, this time with the assistance of the CSO’s Earnings database, focusing on wages. This will give us another, potentially more provocative, look at the issue.

That wages are rising is not in doubt.

Since wages (average weekly earnings) bottomed out in 2011,there has been a growth of 7 percent in the private sector while public sector wages have flat-lined. This has resulted in an economy-wide growth of 3 percent.

Then a millionaire walks in. We measure the same group – all the customers of the pub; but now the average is substantially higher. The original 10 customers haven’t experienced any change in income; it’s just that the composition of the group we’re measuring has changed.

With that caveat, let’s proceed to the next measurement.

How have these two groups fared?

Managers & professionals have been big gainers – over €100 per week, or nearly 10 percent increase. All other employees, however, have seen their weekly incomes fall. Even if with a compositional effect, its’ a significant difference.

However, the rest of the economy brings down the average of the latter two groups.

Rooting under the hood some more here’s another interesting finding: the Information and Communication sector makes up 3.9 percent of all employees in the economy. Yet this sector accounted for 21.2 percent of the entire increase in average weekly earnings.

This shouldn’t be too surprising given the number of multi-nationals in this sector that have located and expanded here in the last five years. Still, it gives evidence of the concentration of earnings.

What does all this mean? Even with a compositional effect, it shows that most of the income increase over the last five years has been concentrated among higher-income groups.

Here are the annualised average earnings for the three categories of workers in the first quarter of this year:

Again, we have to mindful that, especially among service workers (e.g. hospitality), some of this difference can be accounted for by less working hours.

We can’t say how much because the data doesn’t provide earnings per hour or working hours; we can’t produce full-time equivalents.However, Information & Communication employees earn nearly three times the hourly wage as hospitality workers – even more of a gap than the annualised earnings above.

However, if you think rising inequality will result in economic inefficiency and social erosion then you should be concerned. Very concerned.