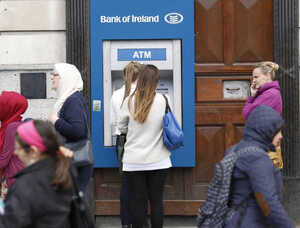 What is the real story with Irish wages?

With all the talk about industrial action and wage claims and wage offers and summer of discontent, etc. etc. etc. it is worth taking a step back and to look at the big picture.

Are Irish workers paid too much in comparison with other EU-15 countries?

A blog written by the Director of the Nevin Economic Research Institute, Dr. Tom Healy, looks at the adjusted wage share in the economy. That’s one way of measuring wages – and it shows Ireland performing pretty badly in comparison.

Here I am going to approach this issue by quantifying the proportion of the economy that goes on wages. But whenever you go down this route you are faced with a big question.

Do we use GDP which is inflated by multi-national profits which are not generated here but are imported to take advantage of our corporate tax regime?

Do we use GNP even though this is also inadequate as it excludes actual productive activity? Or do we use the Irish Fiscal Advisory Council’s hybrid-GDP which attempts to measure our actual economic or fiscal capacity?

Let’s take a cautious, conservative approach and use GNP. In terms of EU comparisons this means using Gross National Income (GNI) which is essentially GNP including payments from the EU (CAP funding, etc.).

When we do this we find Irish workers, collectively, are paid a small percentage relative to workers in other EU countries. 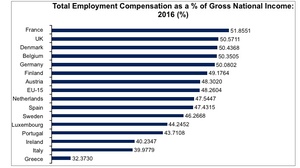 The EU Commission’s AMECO database estimates for 2016 finds that Irish employee compensation is near the bottom of the EU-15 table.

Employee compensation combines both wages and employer social insurance contributions; this is the standard measurement of wages and, as such, can be taken as a very close proxy to ‘labour costs’.

Throughout the EU-15, wages make up 48 percent of GNI. In Ireland compensation makes up only 40 percent – equal to Italy and ahead of lowly Greece (if we used GDP or the Fiscal Council’s hybrid-GDP, the percentage would be even lower).

What would happen if Irish wages rose to the average EU-15 level?

Total wages would rise by €15.4 billion, or 20 percent more than today.

That is the equivalent of €9,400 per Irish employee.

Of course, economies and wages are never so simple; therefore, you can’t run a slide-rule over gross numbers and extrapolate an optimal wage figure.

Much depends on the bargaining power of workers vis-à-vis employers, the position in the business cycle, the sectoral structure of the economy (high-tech? medium-tech?), compositional effect, productivity levels, etc.

However, we can’t get away from the fact that Irish wages take up far less of Gross National Income than in almost all other EU-15 countries.

This is not a recent phenomenon. 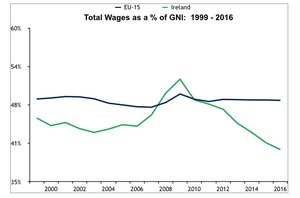 Prior to the crash Irish wages remained well below the EU-15 average. The spike in at the beginning of the crisis doesn’t mean that Irish wages rose. In 2009, they fell by 9 percent and, again in 2010 by 7 percent. The reason wages increase in the graph is because GNI fell even faster – by 13 percent in 2009.

However, by 2011 normal business was restored and since then Irish wages have fallen by 8 percentage points.

One may dispute the legitimacy of a particular wage claim or wage offer. But when you step back and look at the broad landscape – just as Dr. Healy did – one can’t avoid the conclusion that Irish workers are not well paid in comparison with other European workers; at least not in terms of the proportion of the wealth that they generate.

61 thoughts on “Are Irish Workers Getting A Fair Deal?”