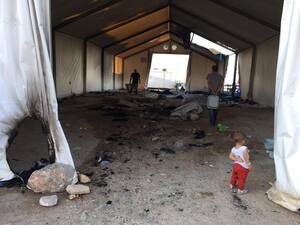 Leslie Meral Schick is volunteering on the island of Chios in Greece.

On Tuesday, she wrote the following:

I’m really struggling to post about yesterday’s events and would much prefer not to, but they have to be told.

In the morning, I attended a coordination meeting of all agencies and NGOs involved on the island. The meeting was chaired by a UNHCR rep; the agenda was long.

Three huge issues – which should have been covered by multiple contingency plans a very long time ago – remained yet again unaddressed:

1. The unbelievable overcrowding in all three Chios camps and resulting inhumane living conditions in some; also plans for housing any new arrivals (which everyone believes is a matter of time; I personally think Erdoğan has his hand on the faucet and will deploy what he deems his most powerful threat against the EU whenever necessary).

2. Escape plans in case of emergencies such as a fire.

3. The fact that – as has been made clear for months now – the food situation is entirely unsustainable.

Currently meals for 1600 refugees are provided by volunteer-run and donation-funded kitchens; the funding is scheduled to run out on June 16.

The UNHCR has no plans in response to any of these three important issues. None.

Their representative pointed out that this is Europe, and that people will surely not be allowed to starve in Europe. Um.

The food has been entirely inadequate. It’s good — but insufficient. The living conditions in some areas, including much of Chios, are ungodly.

I was in Athens last week, struggling to find any housing with running water for a family with a hospitalised newborn and a one-year-old – and supplying people living in tiny tents with no running or drinking water, no electricity, no food, no services whatsoever, with food packages purchased through donations.

None of what is happening is permissible, or humane, or acceptable by any stretch of the imagination. So hearing that surely, surely Europe would not allow refugees to go without food, and waiting until the last moment for a magic wand or magic dust to be sprinkled, is not exactly satisfactory.

The UNHCR will not provide funding for food. There is no plan. Today is the 7th. The kitchens will run out of money in 9 days.

It was pointed out repeatedly that the situation is already dire, that nerves are already beyond frayed, and that serious issues were likely to ensue if food should not be provided.

I know that if any of us were living in these conditions and if our children were hungry and if we had no choices, we would be pushed to the brink too. There was unanimous agreement. Tongues were clucked. The meeting was adjourned.

About four hours later, a large fire was set in Souda Camp. Those responsible have not yet been identified, though they were obviously frustrated refugees at the end of their wits.

Several containers housing NGO offices and a large tent housing refugees were burned to the ground. Walking through the camp and talking to people later I found them not angry, but devastatingly sad.

I sat in someone’s tent as she told how they had escaped bombing in Syria only to find themselves in such horrible conditions – and now, this. She was crying.

A small contingent of local Golden Dawn members immediately took the opportunity to situate themselves at the entrance to the camp and to prevent already traumatized refugees from leaving the site; I heard that a few had been violent, and that some refugees were hit.

It’s just impossible to comprehend how this can be happening, broadcast for all to see.

There is huge need for support of all kinds. Rally your representatives, come and volunteer, donate funds to reliable volunteers and to small NGOs. Please help these desperate people in any way that you can.

Previously: Order Out Of Chios