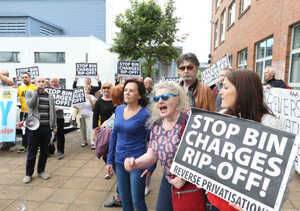 What we need is an alternative to the current system of waste management.

The bin charges debacle is spiralling into chaos.

We have areas where two or three or four bin companies operate and other areas where companies are threatening to leave; escalating charges becoming an intolerable burden on many low-income households; considerable price variations between counties; off-shored private companies pursuing wage suppression to increase profits; considerable illegal dumping; charges for recycling which disincentivises a social good; and on and on.

This is not a waste management policy; it is a circus.

The Minister is set to introduce a freeze on bin charges which would at least give us some breathing space.

The following sets out an alternative outline to waste management. This is not a hard proposal; others will come up with better ideas.

However, it is clear that the current situation is not sustainable – from an environmental, economic, and social perspective.

We should return to this principle. This does not necessarily mean that waste collection would be provided directly by the local authority or some other public agency (but it could – see below).

However, rather than relying on market-forces to provide the service or set the charges, local authorities should re-assert active management and control of waste collection.

Each local authority would have the choice to either:

(a) Provide waste collection directly, or

(b) Franchise out the waste collection to a single operator in a single area.

The latter would, at least, end the competition ‘within the market’ and replace it with competition ‘for the market’. Companies could bid for areas but they would have to comply with a strict protocol covering service quality and workplace relations.

However, under this system they would not set the rate or collect charges. They would merely bid on the cost of providing the service.

As a complement, or an alternative route, a national public agency could be established which would act on an agency basis for local authorities.

This agency would advise local authorities on costs, help roll out a directly provided waste service (e.g. local authorities could be facilitated to combine to achieve economies of scale and efficencies) or manage the franchising administration.

It is difficult to estimate how much households nationally spend on waste collection. Prices are higher outside Dublin – in some cases considerable so. In 2006 the Ombudsman showed average yearly charges ranging from €200 to €400 a year.

The CSO’s Household Budget Survey – from 2009/10 – shows a national average of approximately €200 per year per household.

This should be treated as a proxy as it includes sewerage and skip hire but these make up only a small expense relative to waste. In any event, the distribution of costs would be approximately the same. 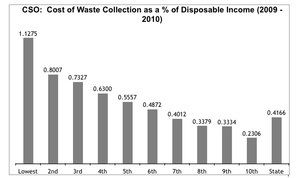 Unsurprisingly, the distribution of costs is highly regressive – given that waste charges are not related to income.

The lowest 10 percent income cohort pays more than five times the amount as the highest 10 percent – measured as a proportion of disposable income; and nearly three times the national average.

We could bring the entire cost be brought back into general taxation with free provision of service. There are two potential problems with this.

First, is the opportunity cost: with so many areas crying out for resources (housing, health, education, investment, social protection, a range of public services), the new expense of free waste collection would crowd out spending in other areas.

Second, is the lack of recycling incentives (though this is more contestable).
Nearly everyone is required to pay for a service – those in work and those reliant on social protection. So the issue isn’t so much charge vs. free; rather it is regressive charge vs. progressive charge.

Therefore, a fractional levy on all income, including capital income (e.g. 0.3 percent) deducted at source should be sufficient to fund a public waste collection service. Some may argue that those on social protection shouldn’t have to pay the levy – but they pay for highly regressive charges already.

A fractional levy would yield them considerable savings. All households with a combined income of approximately €80,000 would be better off – that is, most households.

It is often asserted that pay-by-weight incentivises recycling. This is never quantified but currently Ireland is an EU leader in recycling.

We have the third highest recycling rate, behind Slovenia and Germany; and are well above the EU average. And that’s with only 20 percent of households paying on a pay-by-weight basis.

If pay-be-weight is brought in, it could be done on the basis of charging for ‘excessive’ waste. In other words, each household would get a ‘waste-free allowance’.

But incentivising recycling is more than just about ‘sticks’; there should be carrots as well. For instance, in the Dublin North Inner City the bring centre closes at four and is not open at the weekend – hardly helpful for households in full-time work.

When visiting other European cities, one sees small recycling banks in a number of places; in Dublin there are relatively few.

And if one is concerned with the ‘polluter pays’ principle, the household is merely the final user in a chain of waste. In Germany, supermarkets are required to have recycling banks on site, so that households can get rid of much of the packaging before leaving.

The point in all this is that levies and pay-by-weight charges would be set by public authorities which would go to pay for the price of either directly provided or franchised services.

Appropriate waivers or additional allowances could be granted to households with special needs. These wouldn’t be set by private companies but democratically accountable officials in a public market.

4. Beyond Just Picking Up Waste

There are three further potential benefits from this system.

First, the entire sector would be subject to a Sectoral Employment Order (SEO) which would regulate pay and working conditions.

Since the privatisation of the waste services, wages have been driven down by employers. A SEO would ensure that competition for the market is not based on squeezing labour but is based on service quality.

Second, if a national public agency was set up, they could take charge of managing landfills and waste chains. The agency could maximise renewable energy sources from landfill gas and waste-to-energy projects – so that we get an environmental (and commercial) return.

If the agency established an R&D unit, this could research renewable projects, best-practice in waste management, recycling initiatives, etc.

Third, all private companies that bid for franchise contracts would be required to publish their annual financial statements – just like so many other businesses are required to. This would provide commercial accountability.

This outlines one model. There are other models. If the Minister announces a charge-freeze, we have a year to work out a new model.

And there is a strong argument that any model that emerges from such discussions should be grounded in waste collection as a public service.