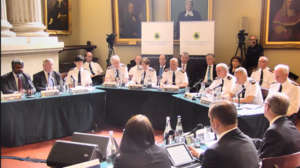 It will take place from Saturday, July 16 to Friday, July 22 and, this year, it’s called Ireland 2016: Moving on from the past to build the future and the legacy of Brian Friel.

On Friday, July 22, at 4pm, there will be a discussion about An Garda Síochána.

Management consultant Dr Eddie Molloy will be the moderator.

A sequence of investigations into An Garda Síochána, from Morris through Smithwick to most recently O’Higgins and their disturbing findings together with revelations by whistle-blowers, paint a picture of a police force in need of fundamental reform.

The Garda Inspectorate reports have very authoritatively confirmed this fact. Most recently, the new Independent Policing Authority issued a trenchant critique of the management culture of An Garda Síochána and has made it clear that it wants to see results.

Meanwhile, front-line gardaí have to do an increasingly difficult and dangerous job, particularly in urban areas, without adequate human and technical resources and, in the case of younger members of the force in particular, being underpaid for such a crucially important job.

It is claimed, not surprisingly, that morale, already low, is further depressed by these reports. The government has promised to increase garda numbers, establish special units to tackle organised crime and to invest in equipment and technology.

However, these initiatives will not resolve the deep-seated cultural malaise, cited in every report, that seems to span an endless catalogue of unacceptable practices, poor policing performance and incidents of corruption within the force, thereby undermining public confidence in and respect for An Garda Síochána.

Meanwhile, Garda Commissioner Noirin O’Sullivan will also be speaking at Magill. However, she will be speaking on Wednesday, July 20, during a debate about international terrorism.

Last night: We Need To Talk About The Guards