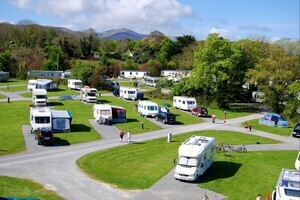 Have ye opened up da’van?

How did it get on over the winter?

So are ye down now?

This is Caravan Park Talk.

You’re either are a caravan person or yer not. I am, with over 40 years ov’it in fact, from my mother’s ‘van in Ardmore, to my own-ie-oh one now; which it must be said, is a bit closer to sunny South Central.

Things have changed since those days in Ardmore, ‘vans now have indoor toilets, so no more bucket or key to the toilet block. Indoor plumbing also means that there’s no more running out to the tap to fill the kettle, the pot, the bucket, to wash your teeth or rinse the dishes.

The whinging about being asked to go out to the tap is another one of those things that are no more, yet somehow is still there to be missed; like the smell of the match lighting the gas under the kettle or toast done under a gas grill.

And the all up and beds put away before an egg gets boiled or fried is gone too.

Go into a ‘van today and you’ll see microwaves, tellys, fancy coffee machines, fridge freezers, and I’ll even admit to having a dish washer in mine. FFS.

So let me help out the non-caravan’er reading this and clue them in a bit.

Originally all caravans were the ones you see on the M11 trying to pull in front of ya. But then around the early ta’ mid 80’s there was a conversion that sounded like this;
“Is it a mobile home or a caravan you have?”

So now on the caravan parks plotted around our coast line you’ll pretty much see them filled with mobile homes, but to caravan people, they are still ‘vans.

The others, the ones spreading all over the lane in front of ya are, for the want of a more ideal explanation, touring ‘vans.

A few weekends ago I called down to my old site, as in me Mam’s, to make sure all “the jobs” were done. These are the opening up jobs; airing the mattresses, cleaning off mould, washing the outside of the ‘van, getting steps repaired, making up the beds, that kinda stuff.

On her site the pals I knocked around with every summer from when I was 4 ish ‘till my late teens, now all have their own vans on that same site. They’ve all turned into their Mams and Dads.

And every site is the same.

Whether it’s the Hot Tub Set in the pricey posh ones with decks the size and function of the Parade Ring in Leopardstown, or the scattery sprawling of wagons of every shape and size with gas bottles like bollards looking to take your toenail off, and droopy washing lines from window to window.

Caravan people are the same.

Who got new cars,Who got away to Spain/ Portugal etc over the Easter Who lost their job t’ who’s changed job, who’s done well etc. Who’s aged, who’s lost weight (don’t look at me btw.), Who’s got new stuff, like kayaks, ribs, boards etc to shove under the ‘van or leave on a trailer blocking someone’s way.

The almighty one; the one weeping across every site over the last few wee… who got a new ‘van.

Tis gas. Once the vans are opened up, the residents do their annual sizing up of each other, including the kids by the way; but by the end of the first week of the season ‘tis like they were never apart for the last 10 months.

That is until the Leaving results come out, then there is a similar staying in-close-quarters with Mammies answering every enquiry with a “got what they wanted.”

Another thing in caravan parks is the big entrance. This is the crowd that arrive and open up mid-season. The crowd that were away; Italy, Florida, France, a Cruise, etc in June/ early July.

That’s their new ‘van moment. These are the same that might also be seen to lock up mid-August because they’re off ta’ Italy, Florida, France, a Cruise etc.

Again every site has them. From Bettystown to Ballybunion.

The falling outs: these usually have to do with your particular site and your on-site behaviour: parking your car too close to next door, loud music, parties, dogs, teenagers, crying babies, gazebos and umbrellas, hedges – that kinda stuff. The other one is your location: is your spot better than theirs.

In pretty much every coastal site there is a Front. It’s so important to ‘van people it’s getting a capital F. Back then, in Ardmore, the Front was also known as Flamingo Road, and everyone else was Coronation Street.

Now if you are on family owned site and go season to season only with the permission of the ‘insert name of the owners’ then who gets on that Front is the stuff that elects Party Leaders,

(BTW every year these sites have a family, or for ‘van people ‘a crowd’ who are put off the site.)

If you are on a Resident Owned site, you simply pay for your spot on the Front, when one comes up that is, and the buyer is usually someone already on the site, and there usually tends to be a bitta non-transparency about the transaction.

Interestingly or to be expected I suppose, the selling price of these sites and ‘vans are a prominent feature of these caravan parks, or resorts as they like to be known as.

Either way, both set-ups manage new arrivals the same. What yer man does, what schools the kids go to, and are there babies and young kids. That can make or break someone’s entry into the ‘van crowd on that particular site. Are your kids nice, are they crying squalling kids, and are ye well off.

I hope there are more ‘van people about here, because I’d love to hear yere stories. Like when ye got the fridge that worked off the car battery, or the portable telly and half the site in ta’ watch the Royal Wedding, or using the local pub’s hot water tap and hand dryer for your wash and blow before the disco.

Or the free ‘van day when the Mammies went up to Cork to get the shopping and washing sorted, or the school books and uniforms.

Or the gas bulb catching fire after you’d had a feed of cider and were too afraid to get help from the adults; all that kinda stuff.

Anyway, I wanted to do this piece for the last while, because it’s part of my thing and it’s already been established that I’m not about July and August. Also, this weekend is when 90% of the ‘vans of Ireland commence their next tour of duty.

It is also that time for year for the Sindo to get a hard on about the Dublin Hamptons set and for a certain Solicitor of the same name, no relation, to come into his wankiest element.

Meh, lay’ve them at it, my ‘van is just my other home really, this year the Broad Band Man has set me up so I can still work without complications, and commute handily enough. The ‘van survived annuder Winter without leaving me with too many jobs to get done, it’s already open so I’m off.

I’ll sign off with the promise of an Irish caravan’er.

The rain’s warmer this time of year.

Honestly, How Are We Doing?

24 thoughts on “The Staying Power Of Caravan People”