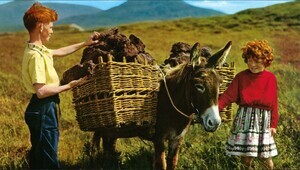 In the period since, more than one third of the remaining one per cent has been lost.

A lost family photograph of ours evokes a particular memory for me. I was about four years of age standing next to my grandfather, who was standing next to his donkey, which had baskets on either side full of turf.

It looked for all the world like a John Hinde postcard depicting an over romanticised view of Ireland, which if it ever existed certainly doesn’t exist now. My grandfather would have cut turf by hand. That Ireland is certainly dead and gone.

Or at least it should be.

Raised bogs are only small proportion of the bogs that exist in Ireland, those chosen for protection a smaller number again.

Bearing in mind that it takes ten thousand years to create a bog, it is harrowing to learn that by 1995, 99% of Irish raised bogs had disappeared. In the period since, more than one third of the remaining one per cent has been lost.

It has been almost 30 years since an EU initiative on conservation has taken root in Ireland. The EU Habitats Directive was first proposed in 1988 being fully adopted in 1992.

In Ireland it wouldn’t be incorporated into Irish law until 1997 under legislation moved by now President, then Minister for Arts, Culture and the Gaeltacht, Michael D. Higgins. This delay was followed by further delays in implementation.

Rural pressure groups argued that the Habitats Directive was being applied too stringently. Successive governments reacted to this pressure by stalling on implementing the legislation.

Slowly, too slowly, Special Areas of Conservation (SACs) began to be defined. However in typical indecisive Irish government action, derogations have been applied to many of these SACs since 1997.

Raised bogs are but a small component of the SACs that have been selected. Together their area is about 10,000 hectares.  This represents about 5% of the turf available for cutting. Other raised bogs have been given less stringent Natural Heritage Area (NHA) status.

A campaign centred around the ‘right’ of not applying the Habitats Directive to raised bogs gathered momentum.

Based on the precept that what always has been done should always be done, and the underlying unstated theme that everything that happens in rural Ireland is intrinsically right, the campaign demonised everyone who denied the right to continue to cut turf on raised bogs – The EU Commission, several Ministers for the Environment and later for Heritage, and more viciously officers of the National Parks and Wildlife Service (NPWS).

The ugliness of the illegal turf cutting campaign is most particularly felt by NPWS officers, a small group of people who have had inadequate State support.

While some of the raised bogs are owned by those who are protesting against the SAC designation most bogs are on already publicly owned land where the turf cutters have had turbury rights – the right to cut turf on public land. A right extinguished once conservation is introduced.

In 2010 as then Minister for the Environment, John Gormley ended the derogation on many of the raised bog sites, alongside a phased timetable for ending all derogations.

As a Green Minister for the Environment he was already being demonised by the turf-cutting lobby. Ultimately this action has not been successful as the compensating factors – financial and relocation have been rebuffed by the turf cutting lobby.

The issue has been used skilfully and successfully by Luke ‘Ming’ Flanagan, and his successor Michael Fitzmaurice, to bring about their election to Dáil Éireann.

The name of the lobby promoting this campaign  – The Turf Cutters and Contractors Association – seems to be the most honest thing about them.

Supporting illegal turf cutting in micro terms causes environmental risks in the form of compromised drainage, and at a macro level removes the potential of untouched raised bogs operating as important carbon sinks, such support is incompatible with being an environmentalist.

Big Brother happens to be the good guy in this case. It is about heritage not greed.

What’s most surprising is the most reasoned sentiments on the issue that has been already been far too prolonged, have been made by the European Commission.

This is an issue where the cliché of ‘stop digging’ has a literal meaning.