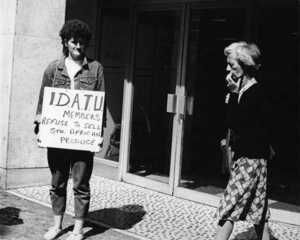 From top: Mary Manning on strike outside Dunnes on Henry Street on August 1, 1984; and Ibrahim Halawa

While doing my local weekly shop, I was extremely disappointed to notice that there is produce from Egypt on the supermarket shelves. I was immediately reminded of the stance taken by those brave supermarket workers who stood up to authority and who refused to handle imported goods from South Africa during the repressive apartheid regime.

I will not buy produce from a country that blatantly refuses to practise basic human rights so that a citizen of Ireland, Ibrahim Halawa, is not given due process of law and is languishing in jail this past three years. What kind of humanity allows this to continue?

I beg my fellow citizens to refuse to buy imported goods from Egypt so that by this gesture we may get justice for Ibrahim Halawa.

Make This The Public Square

254 thoughts on “Boycotting For Ibrahim”