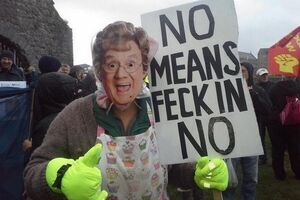 The liberal commentariat (of which I aspire to be part) has been struggling with the state of chassis that is modern politics today.

Attempts have been made to attach the sobriquet ‘Post-Politics’ to the situation. Sometimes with a greater sense of hopelessness the term ‘Post-Truth’ has been applied.

It may be that it has ever been thus, that the real social contract that exists between those voting and those representing isn’t based on idealism, but is held together through nod and winkery that those most successful at politics show the ability to look after themselves first, and that that is all right just as long as most of the rest of us are being looked after as well.

Politics today, if it ever was, is not about what is just and fair. It’s about the saying the right things, to be heard in the right way, by the right people at the right time.

I bend towards the philosophical here, as I have had the realisation that it has been twenty five years since I was first elected to Cork City Council.

It has been a privilege to have participated, to have been chosen, to have served. It also has been, and continues to be, a fascination to engage. Even with those with their checklists who see my engagement as a portal to place onto me the woes of society.

My skin remains the least dense part of me. Nevertheless I’m not going to start indulging in confession for wrongs I don’t believe I’ve committed, or for reversing events that were beyond me then.

The regrets I have are strictly of a personal nature. In choosing what I chose and doing what I did I compromised my family. A career with better definition and certainty would have allowed me to play my family role better than I have.

Where I will admit defeat is to those who have succeeded in what passes for politics these days.

Those who have created a world where from positions of privilege they have portrayed themselves as victims. Those whose narrative is that all can be blamed on others.

Those who have contrived the notion that everything is paid for already. Those who believe that responsibility is always their’s never our’s. A world of truthiness and hopeitude.

The trouble with democracy is that it is a very messy business. It is proven to be one of the least efficient methods of making decisions. It is so easy to engineer and to manipulate. Pander to that prejudice. Never challenge it. These are my people I must follow them, the pathetic yet effective catch cry.

And yet the rights to be wrong, to be indifferent, to be selfish, to be wasteful, to be incompetent are intrinsic to democracy.

At best it could be that these storm clouds will eventually pass. Then those of us who believe in idealism might come out to play again. If only to be able to regain control of the asylum.

42 thoughts on “The Trouble With Democracy”