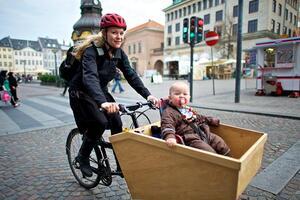 Only the poorer Mediterranean countries spend less on public services.

One of the impacts of the CSO’s recent National Accounts data – the one that shows the economy growing by 26 percent – is that all our main economic measurements are practically useless.

It’s not that we didn’t have trouble before last week.

Using GDP was always fraught, given multi-national accounting practices. But at least we could fall back on GNP or GNI or the Irish Fiscal Council’s hybrid-GDP measurements. Now these are shot as well. We are in a fog.

The former Governor of the Central Bank, Patrick Honohan, was spot on:

‘The statistical distortions created by the impact on the Irish National Accounts of the global assets and activities of a handful of large multinational corporations have now become so large as to make a mockery of conventional uses of Irish GDP . . . GNP is now almost as unhelpful an aggregate economic measure for Ireland as GDP . . . Ratios to GDP are now almost meaningless for Ireland in most contexts. They need to be supplemented by alternative purpose-constructed ratios for specific uses . . .’

So now the hunt is on for robust ‘purpose-constructed ratios for specific uses.’ This will entail a new debate, a flurry of number-mongering and endless disagreements.

And comparing ourselves to other European countries is equally meaningless. GDP per capita in the EU-15 was €33,000 in 2015. According to the Government projections, Irish GDP per capita was supposed to be €46,000 – already inflated by multi-national activity.

Of course, nothing ever being simple, we have to choose between nominal spending (actual Euros and cents) and real spending (factoring in actual purchasing power).

I’ll go with the latter – this counts what countries actually get for their spending excluding inflation and living costs. 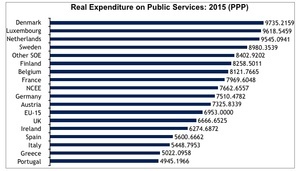 This shows Ireland a low spender. Only the poorer Mediterranean countries spend less on public services. We fall 10 percent below the EU-15 average.

However, it doesn’t tell us much that we spend more per capita than, say, Greece or Portugal – two relatively poor countries in this table.

So when we compare ourselves to our peer group, Northern and Central European economies (NCEE: excludes the Mediterranean countries), we fall 18 percent behind.

And when we compare ourselves to another peer group, other small open economics (SOE: Austria, Belgium, Denmark, Finland and Sweden), we fall 25 percent behind.

But there are a couple of things we should bear in mind:

First, given that we don’t have as high a proportion of elderly, we wouldn’t have to spend as much on health and other elderly-related services. However, we have a much proportion of young people; therefore we have to spend more on education and other services.To what extent these spending ratios cancel each other out would require more research.

Second, Irish spending on public services is subject to very low purchasing power (like consumer spending). We have to spend €113 to match the EU-15’s average €100 just to purchase the same goods and services.

This inflation, though, is not confined to Ireland. Denmark, Sweden and the UK have weaker purchasing power than us.

Another issue is that of reform. The previous government claimed to reform public services but this was mostly made up of cutting employment, increasing hours and cutting wages.

‘Doing more with less’ only means we have less.

A real reform process would include the producers and users – the public sector workers and the users of the public services. It would further distinguish between process issues (are we doing things in the most efficient way) and structural issues.

For instance, does the role of the private sector in our public health system drive up costs? Does it produce perverse incentives that increase costs per patient?

The bottom-line, however, is that we are an under-spender on public services.

To reach the EU-15 average, we’d have to spend an additional €3.6 billion

To reach the average of Northern and Central European economies, we’d have to spend an additional €7.3 billion

To reach the average of other small open economies, we’d have to spend an additional €11.2 billion
These are big sums. Even after tackling inflation and reform issues, we will still be faced with big sums.With the aid of purpose-constructed ratios for specific uses we now see the challenge we are facing.

How will the ‘new politics’ measure up?

17 thoughts on “Why We’re Not Denmark”