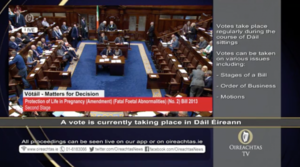 Dáil members voting on Independents 4 Change TD Mick Wallace’s bill, to allow for terminations in Ireland in the case of a fatal foetal abnormality, and how TDs voted

Henry McDonald, in The Guardian, reports:

Dr Lara Kelly is one of the first members of the Irish medical profession to speak publicly about travelling to the UK for an abortion. The 35-year-old GP said her decision to speak out was motivated by the blocking of a bill in the Irish parliament earlier this month that would have allowed for abortions in Irish hospitals in cases of fatal foetal abnormalities.

…At Liverpool airport, Kelly and her husband decided to carry the remains on to the plane, rather than have them placed in the hold, in case the luggage went missing. Passing through security brought on further trauma, she said.

“We were queuing at security for ages and I wasn’t feeling physically great after the procedure the day before,” she said. “When we got to the top we said to the security guy that we had to declare foetal remains. The guy said, ‘What?’ He didn’t seem to understand and so we said it out loud again. He didn’t know what foetal remains meant so Mark said, ‘It’s a baby in the box’, and the man said out loud, ‘A baby in the box?’ Half the queue heard that, probably some of those who were getting on our flight to Dublin heard that.”

…On her way back to Dublin, Kelly approached a member of staff at Liverpool airport to ask for advice about travelling with foetal remains. “The girl was Irish as it happened and she said something astonishing to me. ‘It’s fine,’ she said. ‘You need to go over to the gentleman at customs and declare the remains at security. It’s fine, I did it a few weeks ago.’ That’s what she said to me. It was said with such normality because she had done it herself.”

‘My baby in a box’: Irish GP tells of trauma of travelling to UK for abortion (Henry McDonald, The Guardian) 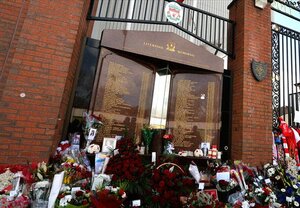