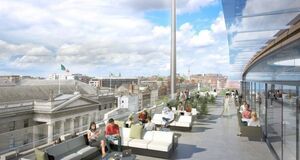 Whimsical post-hipster fantasy or capitalist booze hub in the sky?

Plans submitted by OCS Properties to Dublin City Council are proposing the addition of a new ‘rooftop destination’ to Clery’s department store, which will see it host a series of bars, restaurants and entertainment spaces, as well as the creation of a new boutique hotel on Earl Place.

This new rooftop destination will be available for day and night-time use according to the developers. Other changes will see the department stores facade adding a number of ‘Juliette’ balconies to sit about street level, the staircase being restored to its original condition and the renovation of its famous tea rooms.

The store will see its ground, lower ground and first floors used for retail and its upper office floors being available for letting.

It’s no KaDeWe, in fairness.

Hospital To Homelessness At 81

53 thoughts on “Over The Clerys Clock”