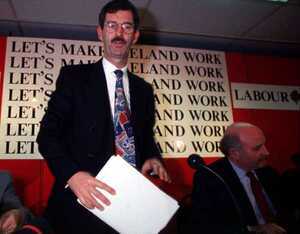 To support the ins when things are going well; to support the outs when they seem to be going badly, in spite of all that has been said about Tweedledum and Tweedledee, is the essence of popular Government’ (Walter Lippman, The Phantom Public)

Those words were uttered in 1925 over 90 years ago but surely we, as an engaged citizenry, have evolved from such simplistic political actions and we instead base our electoral decisions on a complete overview and a more considered analysis of the long-term performance of those we might consider gifting our vote to.

We’re not simply going to fall for the hype and the fancy spun-out words tapping into the zeitgeist sure we’re not?

We’re going to judge people and their respective parties based on past actions and their ability to stand by their word, aren’t we?

You would think, nay hope, that would be the case. However, recent experiences, and current polls, seem to indicate that that is not in fact the case.

In 1992 when Labour swept to power, political scholars including Brian Girvin commented that despite the strong showing by Labour the result was less a vote of confidence in that party but rather a vote for change.

The same can be said of Fine Gael’s success in 2011 when the electorate quite literally went ABFF (Anybody But Fianna Fáil), most recently in 2016 the desire for change raised its head in its most dramatic way yet – but dramatic only by virtue of the increased choice available outside of the traditional 2.5 party system so long prevalent in Ireland.

But on the margins of that significant vote for change was a decided move back towards the old lover/enemy; Fianna Fáil.

The old adage of ‘better the devil you know’ seemed to resound in many voters heads. It was likely helped along by the fact that their 2011 vote for ‘change’ had resulted in 5 years of a Fine Gael/Labour coalition which had cut to the bone in ways few thought imaginable based on the promises and hyperbole from both parties during the 2011 campaign.

In the absence of any meaningful change despite the many promises proffered throughout the decades, many voters have, it seems, chosen to give Fianna Fáil a pass and ignore previous indiscretions in favour of their current stance as the party holding things together and making things happen.

The same Fianna Fáil who paved the path to the privatisation of education is now sanctimoniously decrying the removal of student grants.

I could list myriad other examples. It’s the popular message of the day and so it’s their message – and that’s fine for a centrist party who seek to tap into Lippman’s hypothesis above.

I don’t mean this as a critique specifically aimed at Fianna Fáil, it just so happens that they are the party benefiting from the electorate’s rose-tinted glasses at the moment if polls are to be believed.

Equally the same criticisms can be levelled at any of the two and a half traditional parties of old Irish politics at various points throughout history it’s just that right now they’re the outs and Fianna Fáil are the ins.

Political academia is divided on this topic but increasingly the theory is that long-term performance is less important than short-term factors and specifically economic issues.

The irony is not lost on me that it was economic issues that decimated Fianna Fáil in 2011 yet just 5 years later they are back on the rise, clearly short-term really does mean short-term!

Personally, I’d rather be someone who will stand by what I believe whether its ‘in or out’ and hope that somewhere along the line the majority of the electorate will choose to reject both Tweedledum, Tweedledee and their little half pal tweedleio based on a bigger picture than fancy rhetoric and campaign slogans.

And instead choose to judge on actions over words.

60 thoughts on “Years Of Promise”