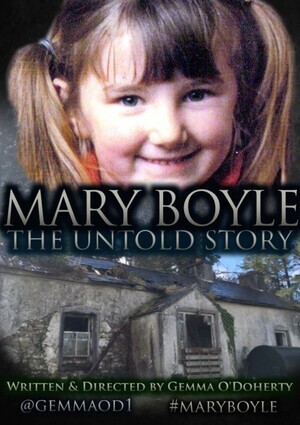 Gemma O’Doherty posted her documentary Mary Boyle: The Untold Story on YouTube on July 4 – about the disappearance of six-year-old twin Mary Boyle in Donegal in 1977.

The documentary, which has been viewed more than 160,000 times, features interviews with retired sergeant Martin Collins and retired detective sergeant Aidan Murray, in which they allege political interference in the investigation into Mary’s disappearance.

It’s been recently reported in the Independent that both men have since denied there was political interference.

Ms O’Doherty, in an interview with Ocean FM yesterday, said, once the documentary was posted online, the two men were very happy with the documentary; she hasn’t been contacted by either of the men and that she finds the reports to be “very sinister”.

The documentary has been the subject of several critical stories in the Independent, where Ms O’Doherty worked as a journalist before she was fired after calling to the home of the then Garda Commissioner Martin Callinan to question him about quashed penalty points.

And yet it is the paper’s recent coverage of Mary Boyle’s fate, much like the recent ‘revelations’ concerning Philip Cairns case, that have sown the most confusion.

Tuesday, July 12, 2016 (morning): Irish Independent reports on a report by the Irish Daily Star that, in the next few weeks, the Garda cold case unit will launch a “fresh investigation” into the disappearance of Mary Boyle, “with all evidence and suspects to be reexamined”.

Following the investigation, which is expected to last six months, a report will be given to the Garda Commissioner Noirin O’Sullivan.

“‘The first thing that will happen is that the team will go to Donegal (where Mary disappeared) to get a feel for the area,’ a source told [the] newspaper. The source also revealed that the detectives would draw up a list of all serving and retired gardai that investigated Mary’s disappearance in 1977. The source said that the new cold case team would have no pre-conceived ideas of who was or wasn’t a suspect and that all evidence would be followed.”

“After a documentary into the investigation earlier this month called Mary Boyle: The Untold Story, there were claims of political interference by two former gardai involved in the case. Retired sergeant Martin Collins claimed a political figure rang gardai at the height of the probe and said: ‘The gist was that none of a particular family should be made suspect for Mary’s interference’.

“Former detective Aidan Murray told the documentary he believed he was close to getting a suspect to confess to murdering Mary but was told to ‘ease-off’ on the suspect by a senior officer. Mary’s twin sister Ann said she believes Mary was being sexually abused and was killed to cover ‘the secret’.”

“Six-year-old Mary Boyle had been at her grandparents’ house in Cashelard, a remote and boggy townland outside Ballyshannon, where the extended family had lunch. Her uncle, Gerry Gallagher, was the last person to see her alive after she walked back to her grandparent’s house but never made it there.”

Tuesday, July 12, 2016 (evening): Independent.ie reports that the gardaí have confirmed that cold case detectives are reviewing the Mary Boyle case.

However, they also report

“In a statement given to independent.ie this evening, Garda HQ said a review is underway into the disappearance of Mary. This evening gardaí dismissed reports that a new investigation is underway, saying the case has never been closed… However the statement said it is being reviewed.”

The statement is reported as saying:

“The disappearance of Mary Boyle is under active investigation as it has been since Mary disappeared and that investigation will continue. Any new information that is reported to An Garda Síochána, in relation to an ongoing investigation, will be investigated accordingly.

“As well as the investigation at the time there have been two reviews by An Garda Síochána into Mary’s disappearance. The latest began in 2011 and is being undertaken by a Review Team from the Northern Region.

“The Review team has to date conducted a significant investigation that has involved interviewing a wide range of people and undertaking a number of searches with the assistance of forensic and geology experts. Its investigation is ongoing.

“The primary purpose of a review is to assist Senior Investigation Officers who are investigating a serious crime by identifying new and potential investigative opportunities. Members of the SCRT are trained in homicide investigation and in the reviewing of unresolved homicides.

“The SCRT comes under the command of the Assistant Commissioner, National Support Services and the Office of the Detective Chief Superintendent, National Bureau of Criminal Investigation. The head of the Serious Crime Review Team is Detective Superintendent Walter O’Sullivan.”

Friday, July 14, 2016: The Irish Independent reports on an Irish Daily Star report that says a 73-year-old fisherman PJ Coughlan claims he saw ‘a red Volkswagen Beetle speeding away from the area that Mary went missing ten minutes before he saw Mary’s uncle Gerry frantically searching for her’.

Mr Coughlan is quoted as saying: “I believe I saw her being driven away in a car. There’s no doubt in my mind she was lifted.”

“Coughlan was the first person at the Garda station in Ballyshannon in 1977 to report Mary’s disappearance. He said he told gardai about the car but he claimed that this wasn’t recorded because the gardai already had a suspect. Meanwhile, Detective Superintendent Walter O’Sullivan has confirmed that the cold case investigation into Mary’s disappearance will be launched in the next few weeks and will last up to six months.”

In addition, it’s reported that Mary’s sister Ann Doherty has complained to the Garda Siochana Ombudsman Commission over “gardai leaking information about the new investigation to the Irish Daily Star before she was notified.”

“It is deeply troubling, that a decision was taken to provide such a development in an exclusive to a national newspaper, before conveying same to our client. Our Client, Ms Doherty has still not been contacted by An Garda Siochana to confirm the contents of the article and therefore we are not in a position to confirm the accuracy of whether or not there is in fact a fresh probe into the disappearance of Mary Boyle, on foot of the recently published documentary.”

Saturday, July 15, 2016: The Irish Independent reports that gardai have started to search a bog – that was previously searched – in Donegal “as a fresh investigation is underway into the disappearance of six-year-old Mary Boyle”. It’s reported that the bog is being drained.

The article repeats the claims of political interference made by two gardai in the documentary Mary Boyle: The Untold Story – again, without naming Gemma O’Doherty as having made the documentary.

Saturday, July 15, 2016 (later in the day):  The Irish Independent reports that “an excavation” has been started on land near where Mary Boyle went missing.

The statement is quoted as saying:

“Mr McEniff emphatically and unconditionally denies that he was the politician who allegedly contacted the Gardai in Ballyshannon at the time of the disappearance of Mary Boyle.

“He has no knowledge of such a call other than what he has heard recently on what was contained in the video “Mary Boyle, The Untold Story”.”

“Mr McEniff is satisfied that the two former Gardai interviewed as part of the video have recently clarified that at the time of the disappearance or in the investigation that followed neither were aware of any such alleged phonecall and that there was no impediment from their superiors in the investigation as a result.”

“Mr McEniff also asserted his right to a good name and said he has taken legal advice in relation to what he says are defamatory comments ‘made both directly and by innuendo’.”

The article names Gemma O’Doherty as the creator of the documentary.

It also states that McEniff, who has been a Donegal County Councillor for more than 40 years, supports the call for a Commission of Investigation into Mary Boyle’s case.

Sunday, August 14, 2016: The Sunday Independent reports that retired detective sergeant Aidan Murray, who was in Ms O’Doherty’s documentary, denies claims of political interference in the investigation into the disappearance of Mary Boyle.

“Retired detective sergeant Aidan Murray, who featured in Mary Boyle: The Untold Story, has claimed the programme was ‘selective’ and ‘misleading’ in how it presented his interview.”

“In a sworn statement to a solicitor, Mr Murray said that at no stage during his investigation into the disappearance of the little girl in Donegal was he subjected to ‘interference’ or ‘pressure’.”

“He said his two senior officers, a superintendent and an inspector, were ‘honourable and professional men’ and ‘at no point attempted to influence’ him in the conduct of the investigation.”

“He alleged that the documentary had ‘taken a number of my comments out of context and creates the wrong impression’.”

“In the statement, which he made last week, Mr Murray said: ‘I was not aware of any alleged phone call at the time and I subsequently heard the rumour many months later at a garda conference.’ He said: ‘The reason Inspector Daly asked me to pause the interview was because of his genuine concern for the mental health of the person being interviewed. It was not for any other reason.’”

“Mr Murray alleged that the Mary Boyle documentary was ‘selectively edited to suggest that this was because of political interference. This is absolutely incorrect.’”

The article also includes sections of Mr McEniff’s statement of July where he denied contacting the gardaí in Ballyshannon at the time of Mary’s disappearance.

It further includes a line about retired Sgt Collins, saying “[Collings] emphatically told a local Donegal newspaper that there had been no political or garda cover-up.”

Further to the reports above, Ms O’Doherty did an interview with Ocean FM yesterday.

During the interview, Ms O’Doherty said:

“I have to say that it’s very alarming. Aidan Murray has not contacted me about this, nor asked me to retract anything that he said in my documentary and nor will I be retracting anything.

“Aidan Murray is very clear, in the documentary when he said, in his own words, that certain people were not allowed to be interviewed, as a result of the politician’s phone call. He said that, I didn’t, it came out of his own mouth. You cannot really un-say what you have said.

“…We did actually record them twice because I was involved with UTV Northern Ireland, making a documentary, and the two men travelled over to Lough Erne Resort and we did interview there.

“Now, we decided we weren’t going to go ahead with UTV, for a number of reasons, so this was something that they did at their own free will. And, you know, I know that after the documentary was aired, on July the 4th, they expressed profound happiness about it.

“Margo spoke to both of them, Margo O’Donnell and she said that they were overjoyed. And I spoke to them and I know that that was their sense as well. So, I haven’t heard from them in relation to this sudden retraction but I do find it very sinister.”

Meanwhile, Mary Boyle: The Untold Story will be screened in Eoin’s Bar on Clanbrassil Street in Dundalk, Co. Louth tonight,  followed by a Q&A with Ms O’Doherty and Margo O’Donnell.

It will begin at 8pm and admission is free.

‘They Know The Truth Is Unstoppable’

19 thoughts on “Staying With The Story”